Army Hammer Bro is a Hammer Bro. and high-ranking member of the Koopa Troop from the Mario series who first appeared in Super Princess Peach where Bowser sent him to the Mushroom Kingdom with some Hammer Bros. to kidnap some Toads. Mario & Luigi tried to stop him and were them selves captured.

Army Hammer Bro is set to appear in Super Mario World: Wii as the boss of World 1's castle.

In New Super Mario Bros. VR, Army Hammer Bro. makes his first appearance as a helper. Since Bowser is pretty much forced to join with the Mario Bros., he as a high ranking Koopa Troop member, and an assistant of Bowser, he appears in Rare Roulette houses that are shaped like his helmet.

He appears in SDSB.

He appears as the boss of the fort in World 2: Chocolate Peaks. His battle is similar to Bowser Jr.'s later fights in New Super Mario Bros. He throw hammers and Koopa Shells. He will first throw a barrage of hammers, then a Koopa Shell. You must stop the shell and throw it at him. This will turn Army Hammer Bro. on his back. Then simply jump on him. Repeat the process twice.

Army Hammer Bro. (referred in-game as Army Bro.), is featured as a playable Warrior in Super Mario Warriors. In battle he carries the element of Fire and fights with the Bros Arsenal, a collection of weapons carried by other Bro troops such as hammers, boomerangs and fireballs. Army Bro. can also activate his Rage Vibe to enhance his attacks. He has several unlockable costumes referencing other Bro. enemies including Hammer Bros., Boomerang Bros., Fire Bros. and Ice Bros. 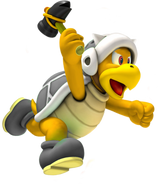 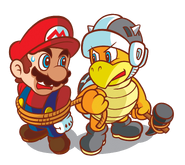 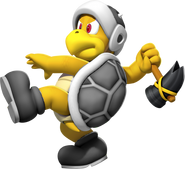 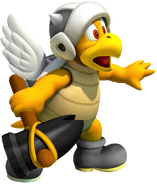