Armies are armadillo creatures that appear in the Donkey Kong series. They debut in Donkey Kong Country as common enemies. They can first be found standing stationary, though will attack by rolling into a ball and pursuing Donkey Kong and Diddy Kong. The Kongs are unable to use their rolling attack while an Army is rolling, otherwise they will be damaged. Instead, they must wait until the Army stops, and then attack. Donkey Kong is able to defeat an Army by jumping on it while it is rolling however; Diddy Kong will simply stun it for a short time. 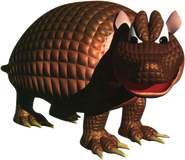 An Army
Add a photo to this gallery
Retrieved from "https://fantendo.fandom.com/wiki/Army?oldid=2639986"
Community content is available under CC-BY-SA unless otherwise noted.