Ariados (Japanese: アリアドス Ariados) is a dual-type Bug/Poison Pokémon. It evolves from Spinarak starting at level 22.

Ariados is a spider-like Pokémon in appearance. It has a red body with black stripes and markings that form an "unhappy face" on its abdomen. Ariados has four yellow legs with purple stripes; its fifth and sixth legs seem to have been moved onto its back. Both the horn and mandibles on Ariados are white. Ariados's feet are tipped with tiny hooked claws that enable it to scuttle on ceilings and vertical walls. It spins a single strand of a special string endlessly out of its rear. The string can also be spun from its mouth; however, it is hard to tell which end is which. Rather than making a nest in one specific spot, it wanders in search of food after darkness falls. It will attach silk to its prey and set it free. Later, it tracks the silk to the prey and its friends. Ariados makes its nest in the depths of the forest. 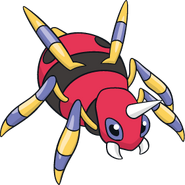 Dream World Artwork
Add a photo to this gallery
Retrieved from "https://fantendo.fandom.com/wiki/Ariados?oldid=1643872"
Community content is available under CC-BY-SA unless otherwise noted.