“He has 4 legs, that does not mean no punch. anyone could just stand up on 2 and punch.”

While it is not known to evolve into or from any other Pokémon, it will change type when it is holding a Plate.

Like Darkrai and Shaymin before it, Arceus was not officially recognized by Nintendo until February 14, 2009, the year of its debut movie. It was officially revealed to international audiences on August 3, 2009.

Arceus is known as "The Original One", as it is said that it created Sinnoh and Ransei, and possibly the entire Pokémon universe, along with the lake guardians and creation trio. Arceus can only be found in the wild legitimately with the Azure Flute, which was never distributed at any official event. However, Arceus itself was distributed via multiple Nintendo events in 2009 and 2010 and the Pokémon Global Link in 2012.

It is the trio master of both the lake guardians and the creation trio.

Arceus is a white equine resembling a qilin or centaur with a gray, vertically-striated underside. The striated pattern has similar recurrences on the underside of its mane, tail, and face. Its four pointed feet are tipped with gold hooves. Its long mane juts away from its head, and its face is gray, with green eyes and red pupils, and a green circular pattern below its eyes. Arceus also has a streak of gold coloration on its head, and ears that point upward. Its neck is fairly long, with two pairs of extrusions to the sides, and a flap-like feature on the neck's underside that is colored white like much of the body. It also has a golden cross-like wheel attached to its body by its round abdomen, which changes color along with its eyes and hooves based on Arceus's current type, which depends on the plate that it wields. The wheel also has four jewels attached to it. The pattern of striated gray of Arceus's underbelly resumes past Arceus's waist. Its limbs have gray undersides and extrusions at the tops of the legs. Arceus's tail is fairly like its mane in shape and coloration. According to legend, it shaped the Pokémon universe using its 1000 arms.

Arceus is thought to have created the Sinnoh region and possibly the entire Pokémon world, the lake guardians: Uxie, Azelf, Mesprit, and the creation trio: Dialga, Palkia, and Giratina. Because of this, Arceus is thought to be one of the most long-lived of all Pokémon species. It has the power to recreate the creation trio as well, presumably to guard the dimensions when a Trainer has caught one of them. According to the anime, its power can also bring back things that it once destroyed, make certain things vanish into thin air, or to halt time.

Arceus is shown to care for and safeguard the planet in ancient times and protected it from cataclysms such as meteors, and it would show gratitude and compassion in return to those who treated it with equal kindness. Arceus does not suffer fools gladly, and it will attack in a violent rampage if betrayed or deceived. It also holds long grudges if betrayed by those it considered friends. In Arceus and the Jewel of Life, it is said to "feed" off the energy of the elemental plates. It is the only known Pokémon that can learn Judgment. 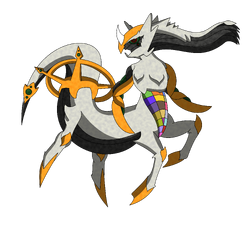 In Generation 9 (Pokemon Sol & Terra Versions), Mega Arceus was introduced, it gains a Stat Boost to each of its five, Non-HP Stats making it have the highest BST once again. In addition it gains a new ability called Multiplex.

Multiplex allows Arceus to gain STAB from any move it uses as well as converting its Type and the Move Judgement into a Type Super-Effective against the opponent, if Arceus is equipped with a Plate then it will convert that Plate into its secondary Type making it one of the few Pokemon that can have the same type twice without the use of a Move like Forest's Curse or Trick-or-Treat.

Arceus is particularly based on a creator deity, present in many world cultures. Arceus's stance and general form are similar to Egyptian bull and calf idols, particularly Apis. Based on its official artwork and attack movements in the 3D games, Arceus may be modeled after a horse. The arc on its back may be inspired by the circle arc used to represent reincarnation in Hinduism.

The conception of the first god might be influenced by the Shinto gods Kunitokotachi and Amenominakanushi, who summoned Izanami and Izanagi to create Japan with the spear. It may also be a reference to the qilin, a Chinese mythical creature. Its myth is nearly identical to that of the Pangu, the Chinese creation deity. Arceus may also represent or be inspired by the bodhisattva Avalokiteśvara, who, in Buddhism, is either pictured with eleven heads and one thousand arms (the latter of which is mentioned in Arceus's Pokédex entry) or in a white, four-armed manifestation (which could look similar to Normal-type Arceus).

Arceus may be a combination of arch (referring to the highest point), archon (a Greek word that means "ruler" or "lord"), arcanus (Latin for secret/sacred mystery), archaic (ancient), αρχή arkhē (Greek for beginning), or archetypus (Latin for original), and deus (Latin for god). It may also derive from aureus (golden, in reference to its hooves and wheel), arc (round or ring), arcessere (Latin for to summon), or Archeus (an aspect of the astral plane).