The Arcade bunny is a pink, anthropomorphic rabbit, and the guide of the Nintendo Badge Arcade. He bears a strong resemblance to the bunnies found in StreetPass Mii Plaza, suggesting he's from the same species, and even has a similar role to the Salesbunny from the same game (to the point of having almost the same alias).

His Japanese name, Baito, suggests that working at the Badge Arcade is a part-time job.

The Arcade Bunny is an anthropomorphic rabbit with a pink fur and creamy yellow muzzle. His ear's insides have the same creamy color, and the ears are tipped red with a gradient. His short eyebrows are also red. His arms appears to have been separated from his body, which is visible at times.

The Arcade Bunny wears a red button-down shirt with white sleeves and red cuffs, underneath a black-gray vest. He also wears dark blue jeans and dark brown loafers. His vest also has a nametag that spells "ABCDE" instead of his actual name, and he also wears a coin dispenser-like pouch on his waist.

The Arcade Bunny is an excitable critter with an array of overly exaggerated emotions. The rabbit can also shapeshift because of this, turning for example into a tall, muscular version of himself, or an actual rabbit. He is very passionate about the "art" of badge catching, but understands when someone doesn't want to spend too much money on a badge catcher.

The Arcade Bunny is a sociable character that often greets the player, talks to them, consoles the player when losing internet, and is in general being helpful. He's also very fond of puns and can be often lost in thought at certain answers of the player. The Arcade Bunny often quizzes the player about certain games when their Badge Catchers have arrived, and often throws silly answers into the mix (such as sea vampires for the Squid Sisters or a pear for Yarn Yoshi).

Some of his more eccentric expressions result in him totally changing his build. In some instances, he turns into a serious buff dude that poses while in others, he turns into a realistic rabbit or a more feminine figure. He is very animated for a mascot character and this carried over to his appearance in Super Mario Maker.

The Arcade Bunny appears as a costume that can be obtained through the Mystery Mushroom in Super Mario Maker.

He appears as an Assist Trophy for Super Smash Bros Ultimate, where he grabs you with the default claw from the Badge Catchers. 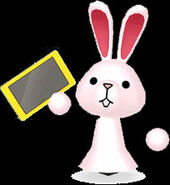 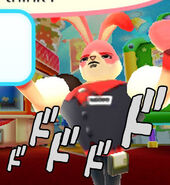 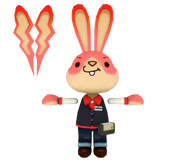