Fantendo - Game Ideas & More
Register
Don't have an account?
Sign In
Advertisement
in: Free to use Characters, Sysop Approved, Characters,
and 15 more

Aran Leverletto is a self-taught engineer, a reserve agent of the Misfits and the leader of the inactive Team Starsnow, the husband of Melissa Dust.

Aran is a character that doesn't seem to have a series that he attaches to, he was planned to appear in a game with the Magma Sentinels but was chosen not to be added into the game. The character was originally created by Ambrisynth, but was adopted by IncarnateParanoia in mid-January of 2019. In March of 2020, the character had become a collaboration between the two users.

Aran is a Caucasian man with light brown hair, usually neatly trimmed and combed, and blue eyes. He is usually depicted in clothes colored mostly black, with hints of orange underneath. He has a particular propensity for black jackets and fingerless gloves. His left arm is missing, having been severed years ago just above his elbow, and is generally replaced by a mechanical limb. His most regularly used arm possesses a bulky cylinder where the forearm would be, and projects energy into the air where his hand would be to serve as fingers. This particular arm is highly weaponized, but isn't good at handling small objects, so he usually uses an arm with a more "arm-like" design while at home or not expecting a fight.

Aran is an aggressive and hot-headed person. It doesn't take much to drive him to anger, to the point where most people think he's just always angry. When meeting new people for the first time, his default response is to either act like a jackass towards them or just ignore them altogether. Even when he isn't angry, he's a bit full of himself and tends to crack jokes at inappropriate moments. Aran's favorite past-time (if you can call it one) is fighting, with tinkering being a very close second. He enjoys coffee, particularly mocha and house blend, and has a personal vendetta against asparagus after nearly choking on it at one point in the past.

Aran's biggest boon in combat is his mechanical arm, which is equipped with a wide variety of combat-ready gadgets. The most notable are a saw blade, an energy blaster, a grappling hook, an energy shield, and a stun gun, though he has been known to use the arm for many, many other functions when needed, and even augment the arm on the fly in combat using enemy technology.

Outside of his arm, Aran has no noteworthy superhuman capabilities. He is, however, particularly adept at hand-to-hand combat. His fighting style relies heavily on his mechanical arm both as a weapon and as a distraction, with the philosophy of "people aren't as likely to see an attack from your right arm coming when they're busy worrying about what your left arm is capable of." His attacks have a wild quality to them, and he will sometimes sneak in some dirty tricks he picked up from the streets of New York City. He is also able to handle one-handed firearms fairly well. He also equips himself with smoke grenades, a mini-sentry, and rocket boots to augment his combat ability a bit further.

Aran appears as the main character in Fantendo - Meltdown and is his first canon appearance. In his he earns the Raven Blade, and also defeats Four for the first time.

Aran appears in this cancelled show as one of the main characters. Most of the episodes aired was about Aran and Melissa's personal life, and not very much else. 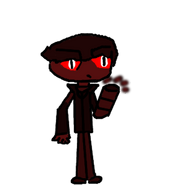 A dark, corrupted version of Aran, appearing in Crimson Bloodline. 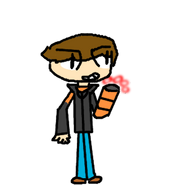 Aran as he appears in Crimson Bloodline.

Aran in a witch costume? I know, I'm confused too.

One of Aran's alts in Sports Resort, based off of Samus' Gravity Suit.

One of Aran's alts in Sports Resort, based off of Torment.

One of Aran's Sports Resort alts, based off of I HEART NY t-shirts.

One of Aran's Sports Resort alts, based off of Samus' Varia Suit.

One of Aran's Sports Resort alts, based off of 'Classic' Aran.