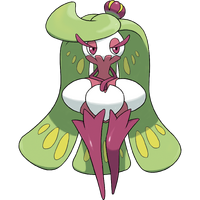 Tsareena is a Grass-type Pokemon introduced in Generation VII, evolving from Tseenee when it is leveled up while it knows Stomp, and is the final form of Bounsweet.

Tsareena is a bipedal, plant-like Pokemon with a humanoid appearance. Its greatest strength is its powerful legs, able to deliver graceful and punishing kicks. This Pokemon is known for having a haughty and high-class nature, punishing those who would approach it with evil in mind, and even turning on its trainer if given ineffective commands.

It is known to be an arrogant and aggressive Pokemon, cackling at its opponent when kicking them, and even stomping on defeated opponents to accentuate its victory. However, as only the strongest Steenee get to evolve into Tsareena, it also uses its newfound powers upon evolving to protect its pre-evolutions.

Due to its majestic and queenly appearance, it sometimes appears as a mascot in advertisements for beauty salons.

Retrieved from "https://fantendo.fandom.com/wiki/Anysmash/Tsareena?oldid=2878912"
Community content is available under CC-BY-SA unless otherwise noted.