Anna “Ani” Polar (Nicknamed: Ani Polar) is the main character of the Tigzon series and childhood friend of Tai Z. Takara. A genius mechanic, who helps build most of the gadgets and other inventions.

Anna “Ani” Polar has a shy, nerdy personality with her tomboyish and intelligent minds. She often finds herself very serious and kind with her friends. With her intelligence, she can fixes any broken pieces and other devices. She has a secret crush on Tai Z. Takara though she tends to hide away from him. She created a pet robot named Spinx when she was a child where her grandfather Dr. Heyto Hyundai, doesn’t have his money left to buy her a new pet animal.

She also a clerk at the DragonBoy video store, which is owned by her grandfather. Her favorite things to do are mostly video games, harem, slice-of-life anime series, romance movies, tennis, drawing digital art, hacking and listening to music (mostly with RnB, Electro, and Pop).

Ani Polar is the only character in the series to not have a Zonantix / Zon spirit. However, she can build some gadgets and other inventions as well as fixes them using her intelligent mind for Tai Z. Takara / Tigzon the TigerStar. She also can communicate with Tai/Tigzon using her telecommunication device and her smartphone sometimes.

Ani first appeared as a tutorial guide to Tai Z. Takara / Tigzon the TigerStar, where explains about how the gameplay works. 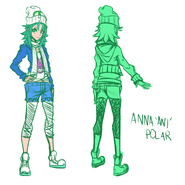 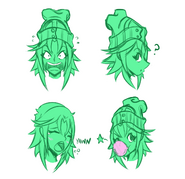 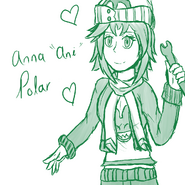 Anna "Ani" Polar by Weeabolo
Add a photo to this gallery

Retrieved from "https://fantendo.fandom.com/wiki/Anna_%22Ani%22_Polar?oldid=3135379"
Community content is available under CC-BY-SA unless otherwise noted.