Animal Crossing - The Adventures of Villager Ai and Friends (どうぶつの森: あ いちゃんと友達のものがたり Doubutsu no Mori: Ai-chan to Tomodachi no Monogatari, lit: Animal Forest: The Story of Ai-chan and Friends) is a anime based from the Animal Crossing video game series. The Animal Crossing anime TV Series is a successor from the Movie: Animal Crossing: the Movie, now, Villager Ai starts for new adventures in the village and meet new neighbors. The series was produced by OLM Digital, Toei Animation, J.C. Staff, Sunrise and Kyoto Animation in Japan. The Anime is be aired in Japan in December 14, 2017 in Tokyo MX, MBS, BS-11, Kids Station and Cartoon Network. In USA production, the anime is going to produce to Sentai Filmworks and Nelvana with the Canadian production together. In Latin America is going to Licensed by Kem Media, LUK Internacional in Spain, Green Yapim in Turkey and Madman Entertainment in Australia. 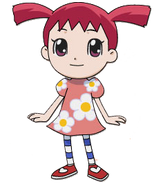 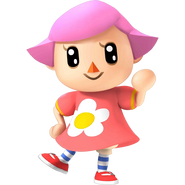 K.K. Slider
Add a photo to this gallery

The Pilot episode is going to Launch in Septenber 8, 2017 for TV Broadcast in Tokyo MX.

The 1st season was released for the first time in December 14, 2017 in Tokyo MX, the Program schedule is Monday to Friday at 7:00 AM. And also, the Season 1 was released in MBS too in Monday to Friday at 12:00 PM. In BS-11 in Saturdays at 3:00 PM on December 16, Kids Station in Fridays at 10:00 AM. And Cartoon Network of Japan, only in Mondays to Fridays at 12:00 PM & 4:00 PM. In USA, the 1st season is going to launch in Boomerang. The 5 episodes was only aired in 5 days, because, the program schedule was paused for the Christmas Special.

Well, the Manga adaptation was published the Volume 1 since July 16, 2017. The Manga is not canon with the Film.

Retrieved from "https://fantendo.fandom.com/wiki/Animal_Crossing_-_The_Adventures_of_Villager_Ai_and_Friends?oldid=3062608"
Community content is available under CC-BY-SA unless otherwise noted.