The name of its universe is Wild World. It is a fanon series created by blu3b34r (t∣b∣c). It is an RPG and Simulation game series that has a balance between living and fighting. The series contains a Saga relating legendary artifacts that relates each other. All of the pieces have a connection to the truth of the birth of the series' universe.

Is The Very First Game in The Series.

The Game takes place after the events of AC:BA,

All of the Wild World's greatest fighters gather in Smashville to prove who's the strongest.

This Is The First Time Bluebear And Stitches Interact.

Many Characters Will Return NPCs Like Katie Will Be Playable as DLC.

Is the new addition to the series, It follows the story from the ending of the last game. This game tells the story of the Key of Two Hearts, A key that is the access to being a billionaire.

The Japanese title is Tales of Animal crossing: Changing Seasons, the English title is still unknown.

It is the first game in the series to focus on simulation, unlike the other games. The game will likely tell how Stitches enetred the series. The player will create a camper who is Stitches' friend and the will likely find out what was Stitches' past and his early involvement in the series. It is like Animal Crossing, but you will live in a Cabin and play camp activities.

A 4th Animal Crossing game has begun planning, It is more likely about Bluebear guarding the key.

It is confirmed that another Tales of Animal Crossing title has now begun planning, and a picture is shown below: 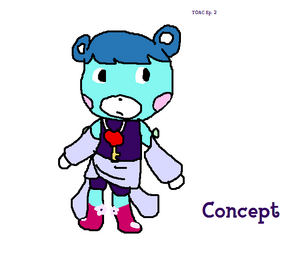 The picture shows Cerulean in an Aqua(Kingdom Hearts) inspired outfit, the game will have new dungeons, characters and a new battle system.

This timeline has a bit of spoilers, please read with your own risk.

The Start of the Future

Stitches was married and became a doctor.

Daisy became a designer along with Margie.

and all the other characters had happy life.(2034)

This timeline is still not finished.

The series' show was announced at Mid-May, It is set to appear in August. It presents all of the characters from the series. It's title is Animal Crossing On Air.

The series will appear in the upcoming crossover game featuring The Legend of Zelda's Link as the main hero.

Retrieved from "https://fantendo.fandom.com/wiki/Animal_Crossing:_Saviors_of_The_Wild_World!_series?oldid=887475"
Community content is available under CC-BY-SA unless otherwise noted.