Animal Crossing: In and Out is a game for the Nintendo 3DS. It focuses after the events of New Leaf: Welcome Amiibo.

K.K Slider appears with his guitar, playing "K.K. Ballad", and asks your gender and he thanks you for buying the game. K.K fades, along with the lobby, and it skips to the bus.

Rover sits on the bus with you and asks a few questions, like "What's your name", "Where are you going", and "What you're going to do there". After that, the bus stops on the station and the player arrives. The bus goes away and the player walks to the Town Hall.

Common Sense Media rated the game 4 out of 5 stars, and for ages 7+. They describe the game as a "simulation game for all ages, including families.". 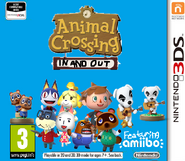 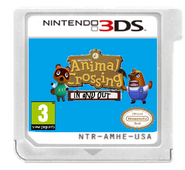 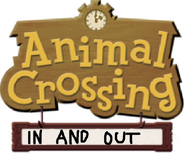 Logo.
Add a photo to this gallery
Retrieved from "https://fantendo.fandom.com/wiki/Animal_Crossing:_In_and_Out?oldid=3026030"
Community content is available under CC-BY-SA unless otherwise noted.