Angry Sun is an uncommon sun-shaped enemy in the Mario franchise.

It first appears in Super Mario Bros. 3, first masquerading as a background element. After a while, it begins swooping down at Mario to damage him, until the end of the level. It can only be defeated through certain means, such as being hit by a Koopa Shell.

After decades of absence from the platformer games, Angry Sun reappears in Super Mario Maker 2 as a new course element that behaves just as it did in Super Mario Bros. 3. In Night Mode, Angry Sun is replaced with a Moon, which will defeat all enemies on the screen when Mario touches it, instead of damaging him.

Notably, in the New Super Mario Bros. U style, Angry Sun is redesigned to resemble ancient Mesoamerican artwork. It is depicted with squinting eyes and a slight frown. Fans have joked that the expression depicts disappointment rather than anger.

The Angry Sun makes a minor appearance in this game as the World Boss of Desert World. The method for defeating him is to dodge his attacks until it becomes night and he leaves. This takes about 7 turns until it happens. The method for attacking him, according to Luigi's Tell Ability, is "...if you try to attack him, the method is: Screw you, you're gonna die!" Despite that he is the boss of this world, he does not hold the Purple Crystal Heart needed to access Hero's World. Instead, he just grants access to Dreamland World.

Angry Suns appear as playable characters in Super Mario Spikers, appearing as Offensive-type sidekicks. They use their design from the New Super Mario Bros. U style in Super Mario Maker 2, though with not many changes other than being colored to represent their team. However, their team emblem is found on their backside. Their theme is a Jazz remix of the Dry Dry Desert theme in Mario Kart Wii.

The Angry Sun serves as one of the two minor antagonists of Mario and the Jambastions. He appears in both Ancient Egypt and Fire Mountains.

As an enemy, the Angry Sun has a disappointed expression and behaves just as he did in Super Mario Bros. 3. As a boss, he has red eyes and a wrathful expression. He defends himself with his pyrokinetic shield to prevent the heroes from attacking him. The hero(es) must dodge his attacks three times until his protective shield disappears so the hero(es) have the right to attack him. When attacked, the Angry Sun will shoot big fireballs. When losing all 3 hit-points, he will be defeated.

Angry Sun as it appears in Super Mario Bros. 3 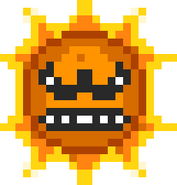 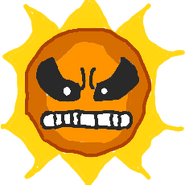 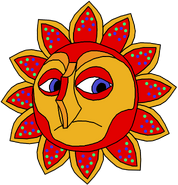 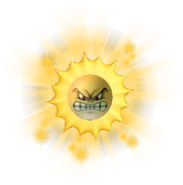 Angry Sun as it appears in the Mario Kart series. 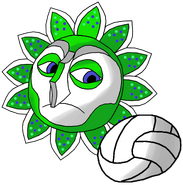 Retrieved from "https://fantendo.fandom.com/wiki/Angry_Sun?oldid=3069574"
Community content is available under CC-BY-SA unless otherwise noted.