Fantendo - Game Ideas & More
Register
Don't have an account?
Sign In
Advertisement
in: Free to use Characters, Characters, Mario (series),
and 8 more

Angelo Helios Koopa (Japanese アンジェロ Angelo) is one of Bowser’s many Koopalings. He is the 26th male Koopaling and the 5th eldest overall. Originating from the SuperStarVerse, so far he has only made appearances in games created by The SuperStar.

Angelo is set to appear in NATAN as a boss.

Angelo is going to be a major character in EIGEN.

Angelo is going to be one of the major characters in DanganKoopa.

Angelo is a Koopa with golden skin, a cream yellow snout and shell plating, and silver scales on his head. He has long, straight white hair that extends down to his long tail and curls at the ends. His shell is cyan with white rings around the spikes. He is usually seen wearing the black studded bracelets that denote his status as a Koopaling, as well as a pale blue mask on his eyes.

Angelo is one of the few truly benevolent Koopalings. He has a gentle nature and doesn’t like fighting the Mario Bros. directly, often opting for a more passive position in Bowser’s schemes. If there is a fight between his siblings, he will always try his best to calm things down and help them make up with each other. His help is often denied, but he continues to support the other Koopalings anyway.

Angelo possesses a form of holy magic with aspects of the sun and sky. This magic is usually used for medical purposes, as it has potent healing properties. In combat, it can take the form of strong winds that can pummel opponents across the battlefield. 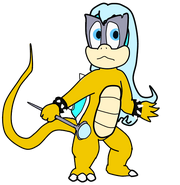 Artwork by The SuperStar