Start a Wiki
“It's sweet and all, but if you can stop some of the worst events from happening, I highly encourage you to do so. I'll still be here.”
— Andromeda, Days of Victory


Andromeda Shader is a protagonist in the Shadowcalypse series and Umbra Shader's current wife. She was initially Queen Nebula's top advisor and secretary, but turned against her after discovering her true intentions and joined forces with Umbra.

At the end of Shadowcalypse 2: Lord of the Blood Moon, she was banished to the present day (the "past" in terms of the Shadowcalypse series) with Umbra. They are currently married and living together in an apartment with their adopted son Apollo.

Shadowcalypse 2: Lord of the Blood Moon

Andromeda sneaks out of her office at the Galactic Tower to look for Umbra, and meets up with him on Kepler-452b. They fight, but she warns him of the rogue Iconoclast, Russell Zhakamovich.

She later visits a magma refinery on Jupiter's moon, Io, and fights Russell there. Later on, she teams up with Umbra to find him.

In Zeusville, a city on Jupiter, Andromeda enlists Plato Konrad and Mara Cruor to help them out. She helps Umbra to try and stop the invasion of the Atlanta Moon Colony, but fails as she is captured by Nebula for treason against her.

She is rescued by Umbra, and later banished to 2016 with him. They begin dating afterwards, deciding to live in this time for a while and get used to it.

While Andromeda does not appear as a playable character, she appears in the story mode as support for Umbra. She can also be seen in some of his winning animations.

Although not a major character, Andromeda again acts as support for Umbra and comforts him after he loses in the tournament.

Andromeda can be very upbeat and fun-loving, but she is also quite sensitive to her own mistakes, having an intense fear of failure and looking bad to everyone in the universe, especially Umbra. She gets nervous thinking about the devastation Nebula has caused in her time and generally wants to stay as far away from those situations as possible due to the trauma she experienced from working under her.

In Lord of the Blood Moon, it is shown that Andromeda is an Iconoclast who can generate light energy; photons flow through her bloodstream, and she can channel them to certain parts of her body to cause them to light up. She can use this light energy to form lasers to attack opponents, heat up her hands for melee attacks, or simply cause them to glow for use in dark areas.

As Umbra's wife, Andromeda acts as a guide for him during his emotional moments where he doubts himself and his accomplishments. Although their relationship is not necessarily sexual, she is willing to listen to his vents and remind him that he is nowhere near as weak or useless as he might tell himself he is, and she finds snuggling with him comforting for both of their personal problems. However, she is also vaguely bothered by Umbra's consistent belief that he has to fix everything that goes wrong, especially in terms of the distant future that they were banished from by Nebula. 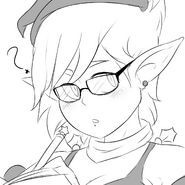 Andromeda as an elf, drawn for the Christmas season by Ziegs (t∣b∣c).

Andromeda in a bunny suit, drawn for Easter by Exotoro (t∣b∣c).
Add a photo to this gallery
Retrieved from "https://fantendo.fandom.com/wiki/Andromeda_Shader?oldid=3251042"
Community content is available under CC-BY-SA unless otherwise noted.