“It's up to you - save Amy and the world from a gruesome future!”
— Tagline

Amy vs The Future is an RPG game where you follow Amy Jackson as she attempts to save the world from her time. The game was given an 18/M rating for graphic scenes and excessive amounts of strong language.

Amy vs The Future is an RPG that works a bit differently from most RPG games. There is no turn-based battling, so you are free to attack whenever, and there are a large amount of levels. The level count goes up to 200, as opposed to most RPGs going to 99. There are also monologues every character has on their bio, which can be played. Monologues can be found here.

The full story transcript can be found here

In the year of 3015, thirteen years after a girl by the name of Amy Jackson went back 1000 years to avoid being turned into a robot, time travel is rediscovered and redone. A greedy businessman, formerly Amy's father's boss and the guy behind the plan to robotise her decides to go back to where Amy was and re-attempt capturing and robotising her. He takes the future's military with him to track her down. With support from her friends, Amy decides to fight the future she escaped.

Before that, however, Amy is shown with Jerry, her boyfriend, relaxing in a country club. She is carefree, until she overhears a radio, talking about an unusual visitor in Los Angeles. Amy gets up, and drives to the city, noticing the sky going grey. Soon after, she saw a somewhat large explosion in the distance. Amy, now terrified about what's happening, triggers a boost in her machine which sends her flying over every other car, and reaching L.A. quickly, to see her father's boss creating mayhem. Amy, scared, escapes back to Anaheim, but realises she is being followed.

Amy starts to fight and almost right away realises she most probably needs a team to help her. So, she forms a group with her close friends, and a few people who she knows are heroes of Earth, including Tayshaun Fitzgerald and Krystal Pérez. These two assist Amy the most in fighting, teaching her new skills along the way. While she defends Earth, Amy discovers that she can use an ability she never knew of at first - she could use her brain to control technology, meaning she could overpower her father's boss.

Amy discovers disturbing things about the world she's living in, and finds out that there is an alien or two in her hometown. She realises, however, that the aliens had been kidnapped. She decides to go alone and puts her skills to the test, trying to get rid of her fear of war. She has a risky task reaching them, as she ends up fighting her father's boss. Before attacking him, he gets away, leaving Amy only wanting more. She frees the aliens and they thank her.

As more and more happens in the town, Amy realises that at some point, something extremely bad is bound to happen. She gets a vision of a demonic creature rising up and helping her father's boss destroy the world. She then collapses. Krystal takes charge while Amy's out cold and assembles a huge team. One person who joined, by the name of Carli, uses a "transformation" she has to assist. Amy, despite passed out, manages to reach Krystal telepathically and tells her to take a demon down.

Still leading the charge, Krystal gives out commands to Tayshaun, herself and Brendan (who is entirely clueless of what's happening) before the battle. They carry on to see a large portal to hell within Los Angeles. As predicted by Amy, her father's boss had tried to get help from a demon. Krystal decides to fight so that the demon doesn't cause too much damage. Partway through the battle, Amy regains consciousness and joins the battle, explaining that her brain decided to go into "lockdown". Carli suddenly goes into her griffin form and bites down on the demon. She manages to pierce it all the way through and kill it, and is considered a hero. As for Amy's father's boss, Krystal grabs a gun and points it at his head, saying:
"You better get the fuck out of California right now."
He warps away, presumably back to the future. Shortly after, a girl called Hitomi opens up a portal to another dimension. The credits scene is somewhat unexpected, with a couple of characters (Brendan, Jerry (Amy's boyfriend), Eddie (a helper in the fight) and Quentin (the narrator)) performing Move Along by The All-American Rejects in front of the portal to hell.

The boxart for Amy vs the Future. Created by Exotoro (t∣b∣c) 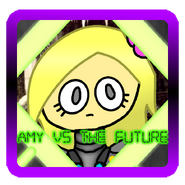 The app icon for Amy vs The Future on the V2. Created by Exotoro.

The banner for Amy vs The Future in the Zeta Neblua X-Shop. Created by .vectorDestiny (t∣b∣c)
Add a photo to this gallery

Retrieved from "https://fantendo.fandom.com/wiki/Amy_vs_The_Future?oldid=3085202"
Community content is available under CC-BY-SA unless otherwise noted.