Amy Rose is an anthropomorphic female alien hedgehog from the Little Planet in the Sonic series. She has pink hair, a red headband, green eyes, and a red dress. She is obviously Sonic-crazed and is rumored to be his girlfriend, though this is vehemently denied by Sonic. Before being called "Amy Rose," she used to be called "Rosy the Rascal", though this name is now used to describe Anti-Amy Rose of ArchieSonic and as a term for Amy has been discontinued.

Amy appears in Sonic Heroes 2 as a member of Team Rose.

Amy makes a small cameo in the Story Mode of Sonic Speedball RPG IV: Speedster Mania when Sonic tries to warn everyone about the Apocalypse. Amy surprisingly refuses to believe Sonic. She plays a larger role in Mission 7 in Mission Mode, where the player can pick any Sonic character to race her to the goal.

Amy can be seen playing hide and seek with Sonic, Tails and Knuckles. At one cutscene when Mewtwo spreads out soul stars which can make people in command of him. One Soul Star hits Amy, turning her evil, this also happens to Waluigi, Donkey Kong, Bowser Jr and Samus.

Amy will appear in Pikachu's Final Destiny 2, as a mini-boss in Eevee's story, hypothized by Jigglypuff's eyes.

Amy has been brainwashed again by Dr. Eggman, but this time is with Sonic and his friends. She will be the second boss of the game, acting like Rouge the Bat. After defeated, she is playable in every Hammer Hitting Game. She is the only playable character to have alternate costumes.

Amy appears in Renan!, where she is working as a waitress in a restaurant. Like Peach, she is sometimes kidnapped by Dr. Eggman.

Amy appears as a protagonist in the game. She first meets Kojuro as he mistakes her for Hisahide Matsunaga.

Amy appears as a playable character at every Olympics from Atlanta 1996 onwards. She is an All-Around type character from Athens 2004 (which introduces ability types) onwards.

Amy appears as an unlockable character after building the Chained Little Planet Model.

She's one of the Survivors of Kirthar's Snap Finger 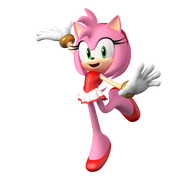 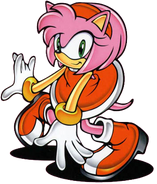 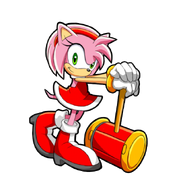 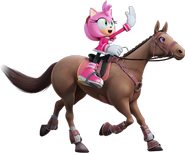 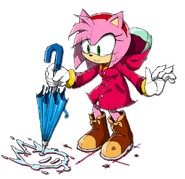 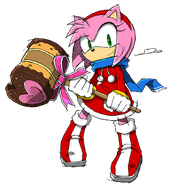 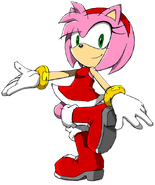 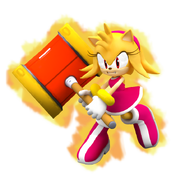 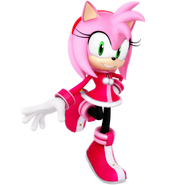 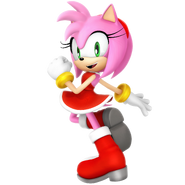 Modern Amy in Classic Amy's clothing and hair by Nibroc-Rock 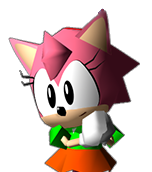 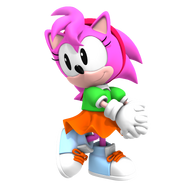 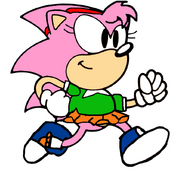 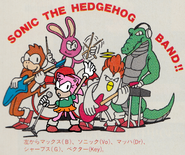 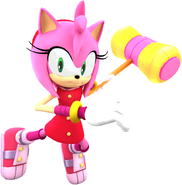