Ampilus are enemies that appeared in The Legend of Zelda: Skyward Sword. Ampilus resemble hermit crabs and are only found in the desert. When Link is seen by an Ampilus, it will roll over to Link and if Link is hit then he will be shocked due to the Amplius being electric. The Ampilus can be deafated by sneaking up on them and attack their bodies quickly. Whenever an Amplius rolls onto something else, they will get dizzy for a couple of seconds and are free to attack.

Ampilus resemble Hermit Crabs and they have large shells that have elecricity inside of it. They also have two legs and two claws. 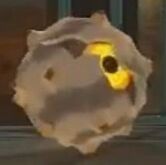 An Ampilus Egg.
Add a photo to this gallery
Retrieved from "https://fantendo.fandom.com/wiki/Ampilus?oldid=3204441"
Community content is available under CC-BY-SA unless otherwise noted.