Ampharos is one of the many species of Pokémon. It is an electric type. It's the final evolution of Mareep. It evolves from Flaaffy starting at level 30. It is a Generation II Pokémon, debuting in the Pokémon series games Pokémon Gold and Silver.

Ampharos is one of the few Pokémon capable of Mega Evolving. An Ampharosite is required to turn Ampharos into Mega Ampharos.

Ampharos is a yellow, bipedal Pokémon with a white belly. It has conical ears with black stripes and a red orb on its forehead. Its long neck has several black rings around it near the base. Its stubby arms resemble flippers and each foot has a single white nail. It has a long, black-striped tail with a red orb at the tip. The orb on its tail can shine so bright, that it can be seen from space. People have used the light as a beacon, or to send signals across the ocean. Ampharos is generally found in grasslands.

As Mega Ampharos, its toes turn black and it grows white wool at the back of its head and over its tail. Its long wooly tail has many small, red orbs attached to it. Its conical ears retain their stripes, but are now segmented with swirled tips. When it increases the amount of electrical energy within itself, the red orbs on its body and wool emit a strong light. 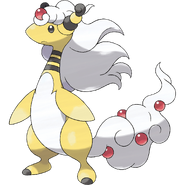 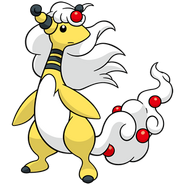 Mega Ampharos' Dream World Artwork
Add a photo to this gallery
Retrieved from "https://fantendo.fandom.com/wiki/Ampharos?oldid=3117044"
Community content is available under CC-BY-SA unless otherwise noted.