Amps (also called Zaps) are small, electrified metal orbs that first appeared in Super Mario 64, later appearing as semi-common enemies on the Mario franchise. The resemble Bob-ombs, though they have a smile as well. Mario can get damages simply by touching one, which will shock him and stun him for a short time. Some Amps are stationary, while others move in a set path. They are immune to any and all attacks save for Invincible Mario, so they must often be avoided at all costs.

Amps originally were designed with white cross popping eyes and had red eyes with rounded white lips with a pure red mouth. This design was last used in Mario Party Advance, but has since been redesigned beginning with Super Mario 64 DS.

The Mario 64 DS design uses jagged yellow eyes and a large jagged mouth. They have a red tongue and a dark red interior mouth. They also have a black color as opposed to gray and don't have angry veins.

Amps are listed as enemies in:

Amps are an item in Mario Kart: Delta and can be dropped onto the course where it will then move in random directions, damaging players if hit. 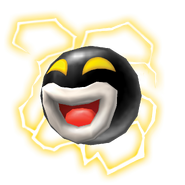 An Amp made by YoshiGo99

An Amp in Lets-a-go, Mario

A Big Amp in Lets-a-go, Mario 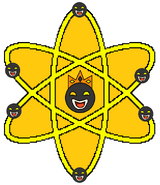