For more information about the character herself, see Princess Zelda.

The Zelda figure is a character figure available in the second wave of amiibo figures. It was released in December 2014.

Zelda is the princess of Hyrule and the namesake of The Legend of Zelda games. Her appearance may change, but she always plays an important role. She knows much about the Triforce; in fact, the only person who likely knows more about Triforce lore is Ganondorf himself, whom Zelda evaded in Ocarina of Time by transforming into her alter ego, Sheik.

Please add your game if it makes use of the Zelda amiibo! 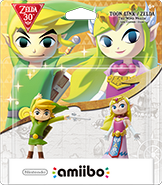 Retrieved from "https://fantendo.fandom.com/wiki/Amiibo/Zelda?oldid=2431135"
Community content is available under CC-BY-SA unless otherwise noted.