amiibo functionality. It is being produced by Kellogs, and the box contains a NFR functional tag that works with Super Mario Odyssey. It was leaked by the cereal blog Cerealousy on November 27th and was confirmed quickly afterwards. It will be released on December 11th, 2017 in the US region only.

The Super Mario Cereal is a box that contains a Lucky Charms styled cereal, with star shaped toasted oat pieces and marshmellows resembling Mushrooms, 1-Up Mushrooms, and ? Blocks. 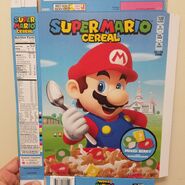 Original design
Add a photo to this gallery

Retrieved from "https://fantendo.fandom.com/wiki/Amiibo/Super_Mario_Cereal?oldid=2513258"
Community content is available under CC-BY-SA unless otherwise noted.