Start a Wiki
“I would give anything to be a princess, but I guess being super rich is just as fine”
— Ami speaking with Mona about why she wants to be a princess
Ami is Mona's best friend and loyal sidekick, who lives in Diamond City and is in high school. She worked at

the pizzeria with Mona and help her out with her problems. She is shown to have a crush on Waluigi and see Daisy as a rival. Ami comes from a VERY rich Diamond City family and is half-human from her mother and half-alien from her father. She also works as a cheerleader, a model, a singer, a fashion designer, and an actress.

Ami comes from a very wealthy family who loved and cared for her for a long time since she was a baby. Her parents would often spoil her and get her anything she wants, but Ami wanted something to fill a hole in her heart and she starts to feel so alone with no one to fill her happiness. Her parents treated Ami as if she was a princess which led Ami to believe she was a princess until told otherwise when she was a teenager. This went on for two years and her parents worried about this until she met Mona, Mona was nice to Ami and they both became fast friends, this made Ami so happy she has her very first best friend ever.

Years went by and she started working at WarioWare, Inc. with Mona at the pizzeria selling pizza. She's very popular among the guys, as they come to see her a lot and she gets so many dates, but dumps them cause they don't have that "special something" she wants in them. When visiting Wario to get her paycheck, she bumped into a skinny guy who was coming her way. It was Waluigi, and he walked away after seeing and talking to her. Ami started to have feelings that she never felt before. She was falling in love for the first time in her life and she wanted to win his heart.

Ami bears a lot of similar facial features with Princess Peach she has a large almond-shaped head with large cyan blue eyes, and plump deep red lips. She also has long light brown/flirty blonde that is tied in a ponytail that reaches her lower back with a red scrunchie and her hair also parts in two long sideburns that frame her face. Ami wears a two-piece outfit, complete with a deep red tank top and a deep red skirt to match which reveals her navel. She also wears light red flats. Ami has also been seen wearing a light red dress to the Mushroom Ball.

Ami is a high-class citizen of Diamond City. She is a very beautiful, very attractive and very charming, but a dim-witted strawberry blonde haired girl. Ami is very superficial and mainly cares about money and popularity. However, after she became friends with Mona, her arrogance tones down a tad. She describes herself as a popular supreme queen in high school.  She started working for Wario because Mona was and she wanted to be closed to her best friend and shows that she is good friends with her other co-workers as she gets along very well with them. She is really popular with the guys as they always want a date with her.   <brclear=all/> 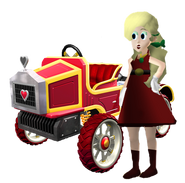 Ami's current look
Add a photo to this gallery
Retrieved from "https://fantendo.fandom.com/wiki/Ami?oldid=3147122"
Community content is available under CC-BY-SA unless otherwise noted.