Fantendo - Game Ideas & More
Register
Don't have an account?
Sign In
Advertisement
in: Sysop Approved, Free to use Characters, Characters,
and 18 more

Amaia Michelle Azarola is the first fully human wielder of Magia, which manifests for her as brief bouts of seemingly limitless physical power. She is currently wandering aimlessly, putting that power to use by fighting whatever she stumbles across.

Amaia is a bit short for her age, and has the muscle build of an acrobat or gymnast. She is a Caucasian with round hazel eyes and rather untidy honey-colored hair, usually worn in a bun so that it doesn't get in her way during combat. She usually wears a gray windbreaker over a white t-shirt with an orange heart insignia, jogging pants, and athletic sneakers. She sometimes also wears orange headphones, though she takes them off when in combat. No matter what she's wearing, though, Amaia always also wears a single earring depicting the head of a fox, which was supposedly a family heirloom.

Amaia is headstrong by nature - a trait which has only been further emphasized after learning how to use Magia. Her incredible energy output at maximum strength has often resulted in her being absolutely convinced that she can defeat some of the most powerful beings in the universe, and will always be among the first to move onto the front lines of a battlefield, however powerful the opponent may be. Given the option, she would even go up against an omnipotent being without hesitation if it meant an exciting fight. She tends to perform well under pressure, and isn't one to panic when things go wrong. She takes her failures with an oddly determined grin, out of anticipation for the day when she tries again and succeeds.

Outside of battle, however, Amaia is actually pretty carefree, though this is overshadowed by how explosively she can react to those who provoke her anger. She isn't one to make a big deal over others' mistakes when she notices them, and instead just corrects them as quietly as possible. Her English, though certainly definable as fluent, is more comparable to the vocabulary of a well-educated tourist than that of a permanent resident, and she will instinctively shift into Spanish when she's alone or distracted. She isn't especially fond of learning new things, and when people start getting scientific she either tones them out or asks them to repeat what they said in a more simple way. Despite this, her ability to perform mental math and quick estimations is actually quite impressive. She loves acid jazz and detests pretty much every organized sport except for gymnastics and combat-style sports (boxing, wrestling, kendo, technically dodgeball, etc), and watches old kung-fu movies on weekends. She enjoys trying new and exotic foods, and drinks a coffee every morning.

By channeling the energy that she has gathered in her body, Amaia is able to unleash the ability she lovingly calls the "One-Hit Wonder," a signature power-enhancing technique that can deal absurd amounts of damage in one fell swoop. The force of the impact can unleash a shockwave of stray Magia that vaporizes incoming projectile attacks and pushes away assailants. Its super-concentrated nature means that it can shatter even the most impenetrable of barriers when Amaia is given enough quiet time to focus on the task at hand. Unfortunately, the technique is so energy-intensive that she can only get a single shot off before she completely runs out of Magia, meaning that she is heavily reliant on absorbing Magia from her surroundings as she fights if she wants to use it more than once in a single encounter. She slowly absorbs residual Magia floating in the air automatically, but can drastically speed up the refuel process by whittling away at enemies’ unused Magia reserves by punching it out of them.

Her greatest flaw, however, is that she has the defensive ability of an ordinary mortal, meaning that a single hit from a supernatural attack usually means Game Over for her. To avoid this, she has integrated elements of parkour and freerunning into her fighting style. When she isn't up in enemies' faces and pummeling their Magia out for her personal use, Amaia puts heavy emphasis on avoiding attacks using acrobatic techniques as she waits for another opening to close in for the kill and/or further pummeling.

Sometime during the events of One-Hit Wonder, Amaia receives some rudimentary Aura training. She relies on her orange Aura relatively sparsely in combat, and for the most part only uses it to bolster her defenses a little bit with Aura barriers. In a pinch, she will also use a secret technique named the "Aura Drill" - a blast of Aura (usually in the shape of a rapidly spinning cone) charged with the full power of a regular One-Hit Wonder attack, and the sole projectile attack in her entire arsenal. She prefers to use it only in emergencies, though, since she can get close enough for a normal OHW most of the time anyway, and having enemies think that she doesn't have any ranged options gives her an advantage in catching them off-guard with the attack.

At some point during her childhood, Amaia's original parents are killed. She is adopted by the Azarola clan of fox spirits as a result. While growing up with them, she finds herself enraptured by their mastery of Magia. This evolves into a full-on obsession after she discovers her Magia manifests as explosive bursts of physical power, and she devotes herself to her training in a quest to become the most powerful person on Earth. This eventually culminates in her leaving home on an aimless quest across the world in search of "challenges."

During her wanderings, Amaia somehow hears about an island resort being used by White Goddess as a trap for the heroes of the Fantendoverse. Unable to resist the temptation to punch an evil deity in the face, she tracks down the island, smashes her way through the barrier surrounding the island, and forces her way into White Goddess' game. Due to being an unexpected addition, the Beorn Android Mk.III is designated as her "doppelganger" during events.

Placeholder art of Amaia's original design. Made with the Gaia Online Avatar Maker.

Placeholder art of Amaia's current design. Made with the Gaia Online Avatar Maker. 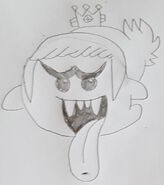 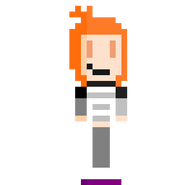 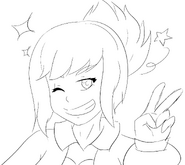 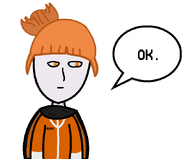 The artwork on Amaia's Face Off! card. Drawn by LegendaryHero1023 (t∣b∣c)

The front side of Amaia's Face Off! card. Drawn by LegendaryHero1023 (t∣b∣c)

The back side of Amaia's Face Off! card. Drawn by LegendaryHero1023 (t∣b∣c)