Altaria is one of the Mega Evolution-capable Pokémon, as it can turn into Mega Altaria, a Dragon/Fairy-type Pokémon.

Altaria is an avian Pokémon with a sky blue head, neck, tail and talons, while the rest of its body is covered in fluffy, cloud-like feathers. It's sometimes seen with its wings fold back, as if Altaria was just a wingless, long-necked bird in a big cloud. Its face consists of two oval eyes, a small, white beak and white cheeks almost the same size as its beak. Placed atop its head are two long, streamer-like plumes. Its talons consists of three front claws and one claw on its heel, and it has short legs. Its tail consists of five long feathers, with the two outer feathers even longer than the three inner ones.

Altaria glides through the sky by using its wings as sails, and usually flies alongside other white fleecy clouds. Because of this, it'll look like an actual cloud itself. Altaria often hums in a crystal clear soprano voice, and can be heard as a beautiful melody far way from the people deep in the mountains. Altaria's singing makes everyone listening to it feel dreamy. If it bonds with others, it'll envelop them in its cloud-like wings and hums a song. It can launch intensely hot flames from its beak as a self defense.

When Mega Evolved, Altaria's sky blue body becomes paler, and its belly becomes exposed. However, it gains a cloud-like plumage of feathers on its back, which can be extended so it looks like a five-petaled flower. Its head is now topped with one blue feather and a wig-like crest of cloud-like feathers. It also gains a fluffy plumage of white feathers around its neck. Its tail become one long tail with five frilly extended feathers, this time with the inner three feathers longer than the outer feathers. The cloud-like feathers gain an iridescent gloss.

Mega Altaria's cloud-like feathers have grown as a measure of self-protection. Its singing ability has been increased and sounds more beautiful than before. Mega Altaria is actually not timid at all and has gained a sociable personality.

Altaria may be based on Peng, a Chinese mythological bird of enormous size, able to travel about 3000 Li in one flap of their wings, which resemble clouds. Peng is often portrayed with the head and whiskers of a dragon.

Tyltalis may refer to Tyl (also known as the Epsilon Draconis), a star in the Draco constellation, which might explain the Dragon typing. It may also come from Mytyl and Tyltyl, the two protagonists of the Belgian play L'Oiseau bleu (The Blue Bird), in which they are tasked to search for the blue bird of happiness. The latter part of Tyltalis may refer to talis, Latin adjective meaning "such" or "of such a sort". 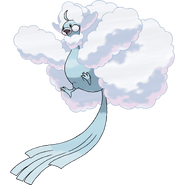