Alph is a character from the Pikmin series, first appearing in Pikmin 3. He was one of the three explorers sent to PNF-404 to collect food for Koppai. Alph serves as the engineer for the S.S Drake, which he, Brittany and Charlie use to get to PNF-404. His grandfather, named Drake, designed the ship. Alph is a positive and very bright character.

Alph is a small male Koppaite, approx. 1.6cm tall. He wears a spacesuit sporting lots of blue including his light, gloves, shoes and backpack as well as his hair. He has an average sized nose and freckles under his eyes.

In Pikmin 3, Alph was one of the three explorers looking for food to bring back to his home planet of Koppai. He and his companions Brittany and Charlie ended up getting in a complication when their ship the S.S. Drake crashed and all three captains were separated.

After reuniting, the captains learned they weren't alone on the planet and began searching for Olimar and Louie who also seemed to have been on the planet.

Alph appears as a starting character in Super Smash Bros.: Going for Gold, and is a semi-clone of Olimar. 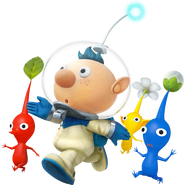 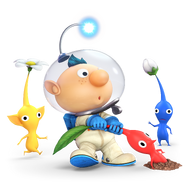 An in-game screenshot of Alph

Alph in-game after crash landing from the S.S. Drake 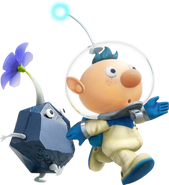