Alpe is a Petilil, and the main character of Bloom as well as the character the player plays as. While she is ultimately a protagonist, she is...not very mature, to say the least.

Alpe is a teenager, and thus she tends to be quite rebellious. She often refuses to do tasks out of pure laziness, prefering to do things she enjoys. She occasionally runs away into the woods, and she has learned it's layout pretty well. She lives in a tribe of Fomantis and was raised as one; she only learns she is a Petilil at the end of the prologue. She often makes sassy comments in times she shouldn't make them. She seems to enjoy dancing and likes watching Lurantis dance. Otherwise, she dislikes the Fomantis and is not afraid to insult them, a behaviour she has been punished for several times. She seems to envy the rich lives of the citizens of Clawtin Town. She does not make much friends and most of these friendships only last a month at most.

Despite these generally rude aspects, Alpe has shown she can be fairly nice to people she finds interesting and friends. While she's not the nicest person in these moments, she makes an effort to not be rude.

In terms of body shape, Alpe looks the same as any Petilil, except that she wears Fomantis scynthes and a hat similar to their "hair". She has a round head with a white crescent-shaped face, and a small body composed of five stubs, two of which act as arms and two of which act as legs. She has sepals connecting her body to her torso, and has three leaves on her head. She has no mouth (although she is somehow capable of eating anyways) and two eyes. However, she appears to have the coloration of a shiny Petilil; she has blue eyes, her head and body are a yellowish color, and she has a more saturated green for her leaves and sepals.

Alpe does not have any special powers other Petilils do not have. Like them, eating one of her leaves would "refresh a tired body", and she has access to multiple Grass-type moves. Notably, she is able to use some moves only her evolution learns in the game, but this was only added in order to let the player have access to stronger moves like Quiver Dance. She is also able to learn Egg Moves via training from other NPCs.

Not much is known about Alpe's backstory. It is said she apparently came from the sea, drifting to the land as an egg. She was born under the hands of a female Lurantis who has been her adoptive mother since then. Hints of her rebellious personallity were already present when she was a kid according to some of the tribe elders.

Ere, the main villain of Bloom, seems to know a little about Alpe despite never having met her until the game's events. It is unknown what is Ere's link with Alpe at the moment. Showstar was the one that told her she was a Petilil, and also told her she looks and acts "kind of familiar".

Relations with other Characters

Alpe is afraid of Ere, which is understandable considering Ere has been giving the task to kill her. Ere, however, wishes he didn't have to kill her, and possibly even wishes to be friends with her.

Alpe and Showstar are on very good terms and consider eachother best friends as of right now. Both can always count on the other when they need help. Showstar often shows Alpe things she doesn't knows about, and is her main guide in the city life despite beign a theif. While they are opposite genders, they are not in love, mainly because plant girls and moths just don't fall in love together.

Alpe and Dr. Magnon are acquaintances. Dr. Magnon is not aware that Alpe is actually a Petilil, but has clearly noticed her differences when compared to other Fomantis. He wants to analyze her DNA to see why she is so different from them.

Alpe and Taff are friends, even though Alpe is best friends with Showstar. He's curious about Alpe's species and wishes she stayed away from Showstar. 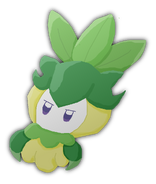 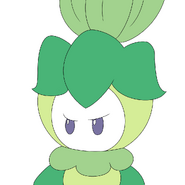 By Scratch.
Add a photo to this gallery

Retrieved from "https://fantendo.fandom.com/wiki/Alpe?oldid=2362591"
Community content is available under CC-BY-SA unless otherwise noted.