Alola's depiction in Sun & Moon and Ultra Sun & Ultra Moon is relatively similar unlike regions such as Unova and Kanto which have changed significantly between games. 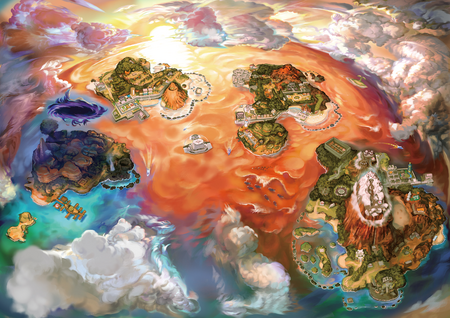 The Alola Region is split up into four major islands, each represented by a particular colour as well as the Island Guardian that protects that island, in the games the player visits each of the islands while completing the Island Trials (which act similarly to Gyms in the previous games).

The first of the Four Islands the player visits, Melemele Island is represented by the colour, Yellow and is protected by the Island Guardian, Tapu Koko. The Island is where the player, Hau and Professor Kukui live as well as other important characters such as the Island Kahuna, Hala and Trial Captain, Ilima. The Island is the second smallest of the major four, it only has one trial on it which ties it with Poni Island for the least number of Trials in Sun/Moon and the least trials overall in Ultra Sun/Ultra Moon. The Normal-Type Trial and Fighting-Type Grand Trial are located on this island.

The second of the Four Islands the player visits, Akala Island is (or is tied with Ula'Ula Island as being) the largest island in the chain. It is represented by the colour Pink and is protected by the Island Guardian, Tapu Lele. The Island is the home of the Island Kahuna, Olivia as well as the Trial Captains; Lana, Kiawe & Mallow. During the player's journey in any of the Generation 7 Games this island also serves as the player's introduction to Team Skull admins, Gladion & Plumeria as well as the Aether Foundation. Professor Burnet also lives on Akala Island. The Island has three trials on it, the most of any island comprised of the Water-Type, Fire-Type and Grass-Type Trials as well as the Rock-Type Grand Trial.

The third of the Four Islands the player visits, Ula'Ula Island is one of the larger islands in the region and is the most vertical having the two highest peaks in Alola, Mt. Hokulani and Mt. Lanakila. The island is represented by the colour, Red and is the home of the Island Guardian, Tapu Bulu. The Island contains two trials on it in both versions with the Electric-Type and Ghost-Type Trials as well as the Dark-Type Grand Trial. The Island is also the operational headquarters of Team Skull who reside in Po Town, it also acts as the home for characters like; Sophocles, Molayne, Nanu & Acerola.

The final of the Four Islands the player visits, Poni Island is the smallest Island in the chain and is the least developed of the Alola Region, this is explained in game to be due to the Island Guardian Tapu Fini. Poni Island is represented by the colour Purple and its Island Guardian is the Pokemon, Tapu Fini. The Island itself is uninhabited aside from the Kahuna, Hapu and her Grandmother. The other residents of Poni Island such as the Trial Captain, Mina, live on Seafolk Village. The Island is notably home to the Altar of the Sunne/Moone which serve an important role in the storyline of all four games. The Island is the only one with a different number of Trials between the four games, having the single Dragon-Type Trial in Sun & Moon while having the Dragon-Type and Fairy-Type Trials in Ultra Sun & Ultra Moon, all four games also feature the Ground-Type Grand Trial.

As stated before the Alola Region doesn't have conventional gyms instead having Island Trials which serve an identical function. There are seven Island Trials in Pokemon Sun & Moon and eight in Pokemon Ultra Sun & Ultra Moon. In addition there are also four Grand Trials against each Island's Kahuna. The Trials pit the player up against a single Pokemon known as a Totem Pokemon which will have one or more raised stats during battle and is noticeably larger than its regular counterparts.

Unlike in previous games where the Pokemon League was an existing entity in each region the Pokemon League in Alola is under construction through most of the storyline with it being complete in time for the player to be the first challenger to the League. Depending on which game the player is playing the League will be slightly different with Hala being a member in Sun & Moon while Molayne is a member in Ultra Sun & Ultra Moon. The other three members are the same across all four games being; Olivia, Acerola & Kahili. As the player is the first challenger to the league there is no Champion for them to face, instead the player must battle against the second challenger to claim the title of Champion, this challenger also differs between the games being Professor Kukui in Sun & Moon while being Hau in Ultra Sun & Ultra Moon. As with the Unova and Kalos Pokemon League the Elite Four can be battled in any order and have Pokemon of equal level to one another.

After the player defeats the League for the first time they can challenge it as many times as they like facing tougher opponents in the process, the player will also find that they can randomly battle a certain group of trainers instead of Professor Kukui or Hau as the final challenge of their League Battle.

Retrieved from "https://fantendo.fandom.com/wiki/Alola?oldid=3012792"
Community content is available under CC-BY-SA unless otherwise noted.