View source
“Also known as the Pokemon of the hunt, it has been said to gift very few people with intense accuracy. It hasn't been proven though.”
— Pokedex entry

Allizel is a Steel/Psychic type Pokemon that resides in (TBA). It isn't known to evolve from or into any other Pokemon, but can De-evolve into Primal Allizel.

It has a Dark-grey saurian-like body, with two tails sprouting from it's rear end. It's face and markings are a dull Teal, while the gems and embroidery are a Topaz color.

When in Primal form, it remains the same in shape, but it's twice as large, having all the dull teal areas become red, and it's eyes are less rounded on the top.

It has been shown to be rather curious, and has it's moments having contact with other crearures. Once it notices something as friendly, it'll start acting playful and wanting to play around. However, it'll defend itself without fail when it spots a Pokeball, even though it was the Pokemon's fault they exist.

It's been said that it will gift someone with intense accuracy whenever it thinks it's worthy of such, and as such, very few people are born with this gift. 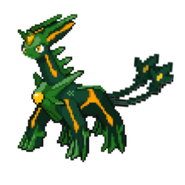 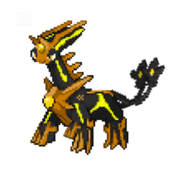 It's appearance is literally a recolored version of a Dialga/Azelf fusion.

However, it's based off of the whole entire sport of hunting(Including the wild animals), which includes it's sniper-based signature attacks, it's curious behavior, it's fear of Pokeballs and loud noises, and it's agressive behavior when it's home is damaged.

It's name could be a combination of "All"(or a corrupted "Elite"), and a corruption of "Weasel".