View source
“To think that once I could not see beyond the veil of our reality... to see those who dwell behind. I was once a fool.. ”
— Alexandra Roivas

Alexandra Roivas, often shortened to Alex, is the main protagonist of the Nintendo GameCube title Eternal Darkness: Sanity's Requiem. She inherits her grandfather's mansion on Rhode Island after his mysterious death, and along with the mansion the Tome of Eternal Darkness. Alex is a university student studying abstract mathematics and number theory in Washington, USA. During the year 2000, Alex exhibits a strange dream where she fights zombies, setting in motion the events of Eternal Darkness: Sanity's Requiem.

After a 16 year absence from any media, Alex makes an appearance in Super Smash Bros. Ultimate as a Spirit. The battle associated with her Spirit sees the player face off against a black-clad Zero Suit Samus (which makes her resemble Alex's design) as the screen will flip in various ways to mimic the Sanity Effects of Eternal Darkness. 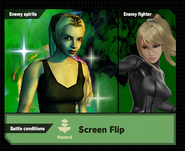