Start a Wiki
Alex Kidd is a fourteen year-old inhabitant of Planet Aries, who serves as the main protagonist of the Alex Kidd series of platforming games. At the beginning of Alex Kidd in Miracle World, the character's debut appearance, Alex Kidd is an orphan who lives in solitude on Mt. Eternal, where he has long honed his skills in the martial art of Shellcore; a mystical fighting style that allows the user to freely change the size and toughness of their fists. After a usurper, Janken the Great, kidnaps the heir to the throne of Aries and begins turning the land's inhabitants to stone, Alex Kidd decides to use his fighting skills to save the royal family and track down the missing king.

Over the course of the events of Alex Kidd in Miracle World, Alex comes to learn that he is the missing son of the planet's king, and he makes it his personal mission to find King Thunder, travelling across the galaxy to achieve this goal. In Alex Kid in the Enchanted Castle, Alex travels to Planet Paperock after hearing rumours of his father being seen here.

Prior to the introduction of Sonic the Hedgehog in 1991, Alex Kidd acted as the mascot of SEGA. Since being replaced in this role, Alex Kidd has made only few appearances, with a majority being in crossover titles such as Segagaga and Sonic & Sega All-Stars Racing. In 2021, thirty years after his final starring role in Alex Kidd in Shinobi World (which was a parody of Sega's Shinobi series of action games), Alex Kidd starred in Alex Kidd in Miracle World DX, a remake of the 1986 title he debuted in.

Alex Kidd is predominantly characterized by his large ears, which, when combined with his short stature, gives him a design somewhat reminiscent of a monkey or chimpanzee. He has a large head topped with short brown hair, and large eyes which have usually been depicted with either black or blue pupils. Another of Alex's most prominent traits are his large fists, something which is due to his training in the art of Shellcore.

In Alex Kidd in Miracle World, Alex was originally depicted as wearing a red jumpsuit that had white two-pointed cuffs on the ends of the sleeves and around his collar. At his neck, beneath his collar, he had a blue jewel embedded in his suit, which matched his similarly-coloured boots. The design used for Alex Kidd in Miracle World would later be used for Alex Kidd: The Lost Stars, Alex Kidd BMX Trial, Alex Kidd: High-Tech World (which was an international conversion of a game based upon the manga series Anmitsu Hime), and Segagaga as well.

For Alex Kidd in the Enchanted Castle, Alex's colour scheme was updated to replace most of the blue in his design with yellow or black. While his boots were formerly blue like the jewel on his chest, the new iteration replaced them with similarly-styled yellow ones, matching a new V-shaped yellow design that extended from his neck down the front of his jumpsuit. The cuffs around his collar and wrists were also removed, giving his clothing a more athletic look. Additionally, while his blue jewel remained in roughly the same spot, it was given a white border decoration. This would become his more popular design, being used later in Sega Superstars Tennis and Sonic & Sega All-Stars Racing. Alex Kidd also wears this jumpsuit at the end of Alex Kidd in Shinobi World, albeit orange in colour as opposed to red likely due to technical limitations.

Fitting it's title, Alex wore different attire for the Shinobi parody Alex Kidd in Shinobi World. Owing to the nature of the game, his design took influence from ninjas and samurai of pop culture, switching out his red jumpsuit for a black one-piece, short-sleeved suit. Around his waist he wore a yellow belt, and underneath his jumpsuit he wore a blue long-sleeved jumpsuit; this second layer would be visible through a V-shaped window on his chest and extending past the short black sleeves of his top layer. He also wore white shoes for this appearance.

Alex would once again be redesigned for Alex Kidd in Miracle World DX, with a new look that combined aspects of his appearances for Miracle World and Enchanted Castle. His general design for Alex in the Enchanted Castle would be retained for this updated title, with a red jumpsuit sporting a yellow design down it's centre, though the white wrist cuffs would be retained from his appearance in Alex Kidd in Miracle World. Additionally, the brooch surrounding his blue jewel would be changed to a yellow colour, and he would be given a yellow scarf that draped around his neck to slightly cover such a decoration. Instead of boots, Alex would instead wear blue sneakers with white toes and soles.

For Alex Kidd's appearance in Sonic & All-Stars Racing Transformed, Sega opted to have him appear as a bonus character who would be automatically unlocked a month after the game's launch, on December 25, 2012. For his appearance in this title, he is treated as a special Christmas bonus character, and as such wears a jumpsuit inspired by the clothing of Santa Claus. Alex Kidd's signature red jumpsuit would be changed to somewhat resemble that which he wore in the original Alex Kidd in Miracle World, sporting white cuffs around his wrists and neck in addition to new ones at the base of his boots. In reference to Santa Claus's attire, Alex's jumpsuit was given a "jacket"-like design with white lines curling around his arms towards his abdomen from over his shoulders, and down towards his legs. Similarly his blue boots would be replaced with solid black ones, and he was given a brown, gold-buckled belt.

When Alex Kidd in Miracle World was localized for North American and European audiences, he was redesigned on the box art as having blonde hair and wore red overalls, a white shirt, and blue shoes; this design appears to have been inspired by the mascot of Sega's direct competitor Nintendo, Mario, who had begun growing in popularity around this time. Similarly, the international release for Enchanted Castle also gave Alex Kidd a more western design that depicted him as a freckled young kid sporting a pale yellow collared polo shirt.

Alex Kidd can be unlocked by scoring 15 goals playing as Sonic the Hedgehog.

Alex Kidd returns as a playable character in Sonic & All-Stars Racing Golden. Alex's default Rank ★ Mod focuses on acceleration and handling over top speed and boosts, while his Rank ★★ Mod is more balanced and Rank ★★★ being more speed-focused. Like in the original Sonic & Sega All-Stars Racing title Alex Kidd drives his Sukopako Motorcycle while on the ground, which transforms into the Pelicopter while airborne and the Suisui Boat while in the water. Stella also appears as a new playable character, joining Alex Kidd for the first time in a Sega crossover title. 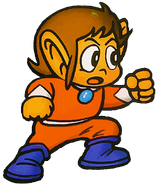 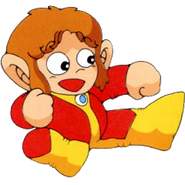 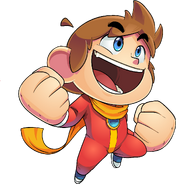 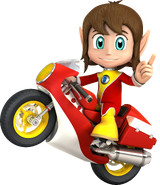 Retrieved from "https://fantendo.fandom.com/wiki/Alex_Kidd?oldid=3235654"
Community content is available under CC-BY-SA unless otherwise noted.