“Nice to help a friend... where is the restaurant?”
— Alex after hearing Aingeru about a restaurant in Battle of Bracelets: The Cursed Death.

Alex is one of the Golden Bracelets who appears in Battle of Bracelets Series, and makes his first appearance in Battle of Bracelets: the Cursed Death. He is the Emerald Bracelet, similar to Aingeru's Green Bracelet. His nemesis would be Vic, the Dark Emerald Bracelet, despite the fact that his enmity is just theoretical. He has been kidnapped in the Hades, and liberated there too. His special weapon is the Chaos Axe, other legendary weapon that, according to the legends, can cut a mountain. His main ability is Invisibility Power, that makes him invisible. This ability is very useful in some battles. He is based off the user: Stelios7.

Alex is one of the Golden Bracelets who are prisoners in the Hades. His first appearance is on Battle of Bracelets: the Cursed Death in the first part of the game. Alex can be chosen as a Playable Character when you defeat the West Oracle. He's the prisoner of the West Oracle, that is controlled by Crane, the West Sage. After being saved by Aingeru and other Golden Bracelets, he joins them to save other Golden Bracelets and defeat the other 3 Oracle Sages. He fights against several Death Bracelets, above all against the East Oracle, who has a big friction against him.

One of the last appearances is against one of the Anti-zodiacal challenges who stars the challenge of Gemini; where he must fight against his Shadow form, representing the twin energy of Gemini. and after that, he helps by fighting against some of the Death Judges. Finally, he also fights against Hades after discovering a big secret about Uil.

Alex is an unlockable character in Bracelets Race where his kart is the Crazy Coaster because he likes theme parks and rollercoasters. He is a character considered all-around.

Alex is one of the default characters of Ella-Metals vs. Battle of Bracelets due to he's inspired by one of the creators.

Alex is one of the most fighter bracelets. He has been long time in the Hades and he could survive in there. He doesn't give up, and he will fight for anything if he needs it. Alex gets on well with most of Golden Bracelets pretty soon, that means he is really friendly with all the people who knows. He doesn't mind to help a friend because he found it as "an obligation that a friend has". He also tries to cheer up the Golden Bracelets when they have a sad or a down moment. Other quality of Alex is that he never lies, he's honest and helpful enough, some things that makes him a good friend of Aingeru or Pablo. Curiously, he is friend of a Dark Bracelet, Uil who met him when they were children, but their relationship turned into a rivalry. He usually fights against Death Bracelets, and some Dark Bracelets such as Drake, or Alange but he also trains with Aingeru, Pablo or Xavier. He also has a person who loves that is called Deryn and is the Silver Ruby Bracelet.

Alex likes lots of things. He can know most of TV programmes and he sometimes makes references to some of their favourite ones. He is also a theme park lover, for example he was hidden in a death theme park in the Hades while he was free in there until Orpheo found him and he brought him to the West Oracle. Alex is also a fan of world food, this hobby is shared with Aingeru and sometimes they run to restaurants like they were dying because of famine. Those things usually make Ainhoa and Elena laugh.

Alex (other kind of artwork) 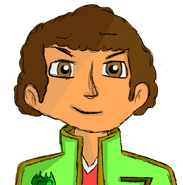 Alex in Battle of Bracelets 5
Community content is available under CC-BY-SA unless otherwise noted.
Advertisement