“Feel the wind, everyone!”
— The Akras Starlet, sign-off from news

The Akras Starlet, known by her real name Felice from her celebrity actor Felice Hannah, is an solo idol working in Akrasville. As an one-man idol, she is best known for her own symbolic music; with meaningful 3rd-person lyrics and elements of realism thrown into them.

As an idol from Akrasville, the Akras Starlet is an moray eel; with the following traits/facts of her;

As an idol in Akrasville, she has the following roles;

Akras Starlet's Erbluhen album was once seen in an abandoned station as Agent 3 explores in. Other albums, such as an Dolphin Dancers and a Squid Sisters album, can be seen on the audiostation as well. An good-bye letter from her can be read from investigating the ruins of the shipwreck Ordaris, which was the ship Agent 3 and his crew departed on, before getting taken by an mysterious force and then crashing.

In Splatoon: Triple Threat, she plays the role as the newswoman of Akrasville, broadcasting the maps and update information for Akrasville. During her broadcasts, she gets to read it out in her own language, and concludes the news with her sign-off message "Feel the wind, everyone!"

In the single-player campaign, the Akras Starlet had the abstinence to not bow down to the Black Faith's actions, during the massive invasion of Black Faith taking over the four nations. She helps out Agent 5 in guiding them to a secret Black Faith hideout with an submarie that would ride him to Zamba Isle. In the ending, she plays her new song for the Resistance as thanks for saving their four nations.

To view the lyrics for these songs, see here for now.

As an singer/idol, she has a total of three dedicated albums. There are currently 3 albums; Erbluhen, Lotus, and Stars. The first album, Erbluhen depicts Felice wearing only a black and slightly torn dress in a black-brick hallway casting out 3 magic orbs from her hand; representing red anger, blue sadness, and yellow happiness. The second album, Lotus depicts Felice wearing only a mystic-patterned leotard doing a chakra pose with her eyes shut. The third album, Stars depicts Felice wearing only a magenta shirt and tight shorts sitting outside a window with a blue moon in the background with Eris Havens buildings (including a clock tower) in the background. Some songs, like the Splatfest songs and battle songs, are not present in her solo albums. A * means this song is not present in the game or the concerts.

The Akras Starlet logo, as seen in her albums. 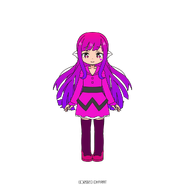 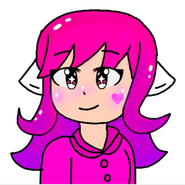 TheWikiOddish's drawing
Add a photo to this gallery
Retrieved from "https://fantendo.fandom.com/wiki/Akras_Starlet?oldid=3192774"
Community content is available under CC-BY-SA unless otherwise noted.