Akihiko Sanada is one of the main protagonists of the Persona 3 games, he has a friendly rivality with SEES/Shadows Operative's leader Mitsuru Kirijo.

In Persona 4 Arena, he has becomed Chie Satonaka's master at petition of her.

Akihiko is one of the playable characters.

Akihiko is part of the DLC Pack 3 characters along with his disciple, Gohan and Piccolo.

Akihiko appears as an NPC.

He and Mitsuru appears on Chapter 8 confronting F.A.N.G. and M. Bison at the entrace of Iwatodai Dormitory, Bison explains them that they are planning to steal Aigis to hack her system and turn her a lethal Shadaloo weapon. The duo refuses to give her to someone as evil as them and prepares themselves to fight them.

Right then, Shinra and the allies at that moment arrived just in time to find Shadaloo invading Port Island.

Once Shadaloo escapes, Akihiko and Mitsuru tells Urashima about some gates to other worlds that has appeared around Port Island recently, before wishing Aigis good luck and bring them an analysis of the strange phenomenon.

He would later reappear in the Epilogue alongside the other NPCs where he, Mitsuru and Aigis thanks Reiji and Xiaomu for help S.E.E.S. dealing with Ouma.

Akihiko is one of the playable characters from Persona 3.

He is one of the playable characters in the game. 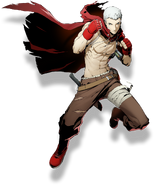 Akihiko vs Chie
Community content is available under CC-BY-SA unless otherwise noted.
Advertisement