Start a Wiki
Akataro is a character from the Fanon-game, ~Wild World~ . He is a police chief along with Cearul, but is nicer than him by a long shot. He is modest, kind and is always willing to mediate a situation.

Akataro is a very kind & soft-spoken man, who is also very clumsy. He tries to mediate situations even when they seem like they can't be solved at all, but in the end they usually work out. He's very incapable of self-defense, but still gives it his all when faced with a difficult situation.

In his FriendClopedia blurb it is stated that he hates the dark, and he'll sometime make noodles,and sneak them to his boyfriend, Rudy.

Akataro doesn't have a defined routine yet,but he will eventually have one in the distant future.

Cearul is Akataro's police partner and higher-up. While Cearul is brash and very rude, Akataro is kind and sweet. Despite his stern exterior, Cearul cares deeply for Akataro, and wishes only to protect him from harms way.

Rudy is an upcoming character,who has yet to be implemented into ~Wild World~,but he is planned to be Akataro's boyfriend,and eventual Husband in a quest in the distant future. 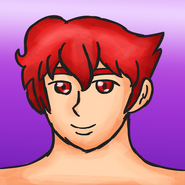 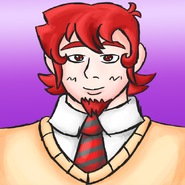 Retrieved from "https://fantendo.fandom.com/wiki/Akataro_(%7EWild_World%7E)?oldid=1924656"
Community content is available under CC-BY-SA unless otherwise noted.