Akari Mccloud shortened for Akari is one of the main upcoming characters for star fox she appears 15 years later after the nightmare Sega she is the daughter of Fox The leader of Star Fox along with his wife Nikita and she is the cousin of Miwa who is her father's rival Wolf. 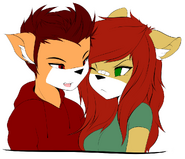 Add a photo to this gallery
Retrieved from "https://fantendo.fandom.com/wiki/Akari_McCloud_(Future_Timeline)?oldid=2674665"
Community content is available under CC-BY-SA unless otherwise noted.