Aiva is regarded as quiet and very closed. She seems to be extremely intrigued by flowers, collecting as many as she can find. However, her calm nature hides her hostility. Due to this, Aiva isolated herself in Soda Jungle so she won't harm anyone. Aiva is also a bit of a pushover, as she's unaware of what isolation can get herself into.

Aiva, in all her forms, is flat-chested and slightly chubby. Her hair remains in the same style. She also appears to not wear a shell at all.

Aiva's main form consists of a light yellow skin tone and a light green head. Her hair appears short with curved horns. She also has a sakura in her hair. She also appears to have no claws. Her iris is a darker shade of blue. She wears gray sweatpants. Her hoodie design appears as an aesthetic sunset.

Aiva transforms into this form when she's in areas above 75° F. Like her normal form, she has no claws. Her sakura is much dark and her her color is slightly more tealish. Her horns now resemble Cackletta's horns, except they're teal with blues strips. She wears gray shorts and a blue hoodie with a sad face. Her sclera is now blue. Her hair appears a bit messier and lighter in color.

This form reveals her deer-like traits. Her horns are more antler-like and the sakura is missing. Her hair color is the same as her warm form. Her head color and skin color are slightly lighter and desaturated. Her eyes are lighter and strictly more cat-like. She appears to have claws in this form as well. She wears a blue scarf and a jacket. She also appears to wear jeans accompanied by a belt.

A World of Tomorrow

Aiva is a deuteragonist in A World of Tomorrow. After Peach gets corrupted by the Fear Lotus, Jr befriends the captured Aiva and is the second party member to join, after Iggy. Aiva claims she been captured by corrupted minions, where she reveals her shapeshifting ability. TBA

Aiva became close friends with Bowser Jr during the events of A World of Tomorrow. She seemed to be extremely timid at first, due to avoiding Dark Land for a long time, however, she grew calmer around him overtime.

Prior to A World of Tomorrow, Aiva did not want to be affiliated with the Koopa Troop due to her hostility. Not only that, but she felt uncomfortable for the amount of Koopalings Bowser adopted.

Aiva's concept for her 2015 design 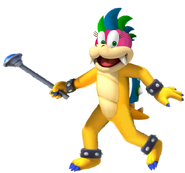 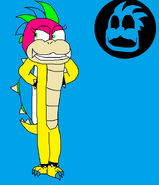 Another 2016 Aiva
Add a photo to this gallery
Retrieved from "https://fantendo.fandom.com/wiki/Aiva_Koopa?oldid=3005576"
Community content is available under CC-BY-SA unless otherwise noted.