Airstrike Bills are similar in appearance to the typical Bullet Bill, but they are orange and have spikes.

They are usually found in Fortresses, Castles, and Airships. An Airstrike Bill Launcher will launch an Airstrike Bill towards Mario's location. Once they hit something, they will explode and knock Mario back.

Airstrike Bills made their first appearance in Waluigi Gameland. In this game,they mostly appear in the Projectile Field.

Airstrike Bills return in Captain Toad: Lost Adventure. They are a bit more rare than the normal Bullet Bills. They behave almost the same as they did in their previous appearance.

Bowser: Quest for the New Empire

They return in Bowser: Quest for the New Empire. They behave the same as in their previous appearances. 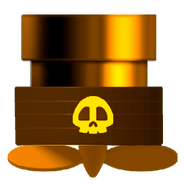 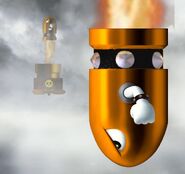 Airstrike Bills getting launched out of a Launcher 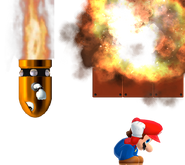 Mario taking cover.
Add a photo to this gallery
Retrieved from "https://fantendo.fandom.com/wiki/Airstrike_Bill?oldid=2681823"
Community content is available under CC-BY-SA unless otherwise noted.