The Overclove (not yet released)

Agustaclove's origins as of now are shrouded in mystery as to where he exactly came from, one day when Krogbord was finishing up a sector of the now incomplete Overclove he spotted a small green creature run under some steel girders out of fear, this was a younger version of Agustaclove.

Krogbord eventually convinced the young lad to crawl out from his hiding space and eat some food because he looked quite malnourished and dried up, at the end of the day Krogbord went to his quarters with the green guy in tow, Agustaclove officially became Krogbords second adopted child next to the still young and brash Cephona who wasn't too fond of her new little brother.

As the years went by Agustaclove grew larger, stronger and eventually gained a propellor to allow him to fly along with getting newly found powers and a braver heart, being able to stand up to opponents twice his size however he is mute and is quite naive and a bit reckless from time to time but he knows when he takes things a bit too far.

On one fateful day the now grown-up Agustaclove and Cephona were relaxing in their dad's house watching a movie when a massive explosion caused an electrical surge and sent the entire Overclove into pure chaos, the seasons where getting corrupted, the animals were having mass hysteria and Krogbord was having a panic attack trying to figure out what was going on.

It turns out that a crystal of pure hatred manifested into a crusty red fellow named Crunx who just destroyed the main source of the Overclove, the Gaia Shamrock.

When word got out of a threat to the Overclove being present Agustaclove rushed out the door and encountered the red fiend for the first time, it was a tough battle but Agustaclove managed to run him off to parts unknown, Cephona and Krogbord wherein a toxic shock when they saw him fight Crunx single-handedly, but they eventually realized what they had to do, they had to set out and take care of this new menace and restore the Gaia Shamrock and help restore the Overclove to its former glory!

Agustacloves main home of The Overclove is classified as a mechanical biosphere known as an Overture, Overtures are built to help colonize the universe, help with many overpopulated planets or to provide safe sanctuaries for many endangered species of flora and fauna, each one has a power source that helps regulate the climate, makes the sky intangible, balances the seasons and help with the production of photosynthesis for the many plants that populate these areas.

When an Overture loses its power source everything is flung into a chaotic frenzy of unholy proportions, leading us back to the events that are now transpiring in the Overclove of today.

Cephona is Agustaclove's adoptive sister that helped Krogbord raise him into the bulky lad he is today, however, she gets a bit tough with him to make sure he does the right thing and doesn't veer off the beaten path too much, she still loves him to death tho and has since nicked named him the "Big Green Sweet Heart".

Krogbord is Agustacloves adoptive father, he has taken care of him since he was just a wee lil baby that wasn't even 2 feet tall yet, he has taught him many life lessons, gave him life advice and made him grow up strong and (mostly) mature.

Crunx being the main villain of the Overclove and destroyer of the Gaia Shamrock they both hate each other equally and can't stand to be near each other in the same room, Crunx eventually wants to capture Agustaclove and send him off to an uncharted planet, never to be seen again but the exact opposite happens during the events of the overclove.

Blockhead is Crunx's assistant however he is being held against his will to be his assistant, he's show time and time again to have spite and malice towards his job, while he does have an often cynical and pessimistic outlook on the world he wishes to join agustaclove and help protect the overclove from crunx and his stupid plans, crunx really treats him like trash, repeatedly throwing him around like a ragdoll and blaming him for the messes he didn't cause. Agustaclove feels really bad for what Blockhead has to deal with but he can't do much outside of hoping for the best

Agustaclove has a round spheroid shaped body with green arms, each with 3 fingers and a thumb, 2 legs with feet nubs on each of them, 2 massive black circular eyes, green stars that float around in his clear hard plastic body as they conduct energy to keep Agustaclove full of stamina and energy without having the need to eat as often. Agustaclove also has a light green cylinder with a grey propellor on top to help with flight and being able to use it as a throwable weapon.

Agustaclove has his fair share of powers, the first of which is enhanced durability due to his body being composed of a strange and plastic-looking material that can take a high level of stress and pressure meaning Agustaclove doesn't need traditional armor but the one downside is, is that it makes him much slower and his flight speed a lot more sluggish.

Other powers of his include being able to shoot seeds out of his finger like a machine gun to deal with enemies and to help out in otherwise difficult fights, Plasma Bolts that are generated by the floating stars in his body and be able to be thrown back out at his enemies, the ability to retract his arms, legs, and propeller to roll at high speeds like a bowling ball or to mix with the plasma he has to make a makeshift homing attack, he is also able to fire out a wide variety of projectiles out of his head cylinder, like bombs, flares, ice shards, missiles and various other types of projectiles to help him on his journey and finally, he has his ultimate attack: The Beam of Luck, he will take off his propellor and hold it in front of himself as he proceeds to spin it rapidly, then a thin light gray beam will shoot out like a hose along with shamrocks floating around the beam, the beam trajectory can also be adjusted allowing to have a much wider range.

Agustaclove appears as one of the many fighters in the game Fantendo Smash Bros. Battleground

While Agustaclove doesn't appear as a fighter, he does show up as a spirit alongside Krogbord and Cephona and he is also an assist character there as well.

Agustaclove appears as one of the games default fighters, everything about his appearance is unknown as of now

Agustaclove appears in Fantendo Smash Bros. Something as an assist character, he slowly flies around the stage shooting either rapid-fire seeds or missiles to disrupt opponents.

Agustaclove also appears in Fantendo's Card Cataclysm as one of the main fighter cards, his attack is beam of luck

while agustaclove doesn't actually appear in the game, an unlockable hat based on him can be worn by the various classes

agustaclove appears again as a hat but this time, its literally just agustaclove sitting onto of the characters head

Agustaclove appears as an item you can use during a fight. The item works like a Bumper for the Super Smash Bros series with stronger knockback if the player lands on Agustaclove's propeller. 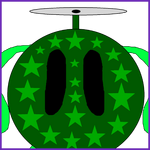 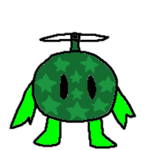 A 3D Model of Agustaclove