Agent Shadow is very strong mentally, and can be very emotionless when it comes to events in her life, such as a death in the family. She believes that emotions show weakness, and does all that she can to hide them from everybody possible. She can easily become flustered when somebody figures out how she actually feels at one given time. She is a very determined and dedicated special agent and will do all that she can to stop crime, even if it puts her own life or somebody else's in danger.

Agent Shadow has the ability to manipulate shadows. This means she can delve into shadows and move freely within them, which allows her to gain access to information and news that she may not have been able to hear otherwise. She is also pretty fast. However, if she stays in sunlight for too long, she will grow in age, and eventually die. When the damage by the sunlight is done, there is no way to reverse it, so she must avoid it at all costs.

Agent Shadow appears as a boss in Shrines. Once defeated, she became a playable character in the game.

She makes her protagonist debut in Hypnotic Shrines: Freaks of Nature.

She returns as a playable hero in Dimensional Destruction. 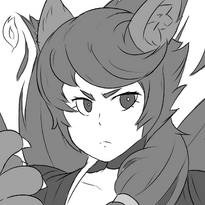 Retrieved from "https://fantendo.fandom.com/wiki/Agent_Shadow?oldid=2375700"
Community content is available under CC-BY-SA unless otherwise noted.