Agent Dolphin (not official name) is the main character in DOLPHIN. He is a mysterious and quiet character, with little-to-nothing known about him.

Agent Dolphin is the main playable character in this game. He is intent on shutting down the corporation known as DOLPHIN by killing its owner, Mr. Shark. Dialogue from Mr. Shark implies that they had a history together prior to this game, but this is yet to be seen.

“Ah, it's you. Last time I saw you, you were just a scared little (boy/girl)... Now I can finally destroy you.”
— Mr. Shark, talking to Agent Dolphin when they meet in DOLPHIN.

Agent Dolphin is confirmed to return in the sequel to DOLPHIN, probably as the playable character yet again.

Agent Dolphin will be a playable character in at least one of these games.

Agent Dolphin's main weapon is his laser gun. It can charge shots, similarly to Samus and Mega Man, and can be updated to shoot homing missiles until it runs out of ammo. Another update allows it to serve as a flamethrower.

He is also strong, and with the added weight of his mechanical suit, his punches and kicks are quite effective. He also has jet boots, allowing him to jump higher. 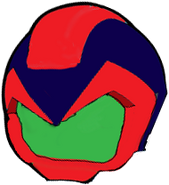 Concept artwork of Agent Dolphin's helmet.
Add a photo to this gallery
Retrieved from "https://fantendo.fandom.com/wiki/Agent_Dolphin?oldid=1232938"
Community content is available under CC-BY-SA unless otherwise noted.