Agent 4 is a young Inkling who traveled to Inkopolis for unknown reasons and was recruited by Marie for the New Squidbeak Splatoon to save the Great Zapfish and defeat DJ Octavio. Along the way, they also saved Callie from DJ Octavio's influence.

Agent 4 is completely customisable by the player, but is seen in official art as having short yellow hair and red eyes. Agent 4 also wears the Hero Suit and weilds the Hero Shot, but more weapons can be unlocked.

Agent 4 is a playable character in the Hunger Games: Smash Edition! 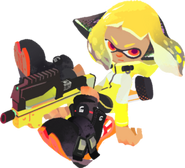 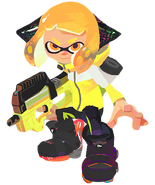 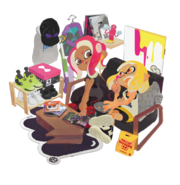 Retrieved from "https://fantendo.fandom.com/wiki/Agent_4?oldid=2999146"
Community content is available under CC-BY-SA unless otherwise noted.