After Kirby's Dream Land is a platform game developed and published by Nintendo for the Game Boy, released worldwide in July 1993. It is the second main entry in the Kirby series, and introduced Prince Fluff, controllable by a second player. In the story, Kirby and Prince Fluff have to stop King Dedede from stealing all the stars so he can defeat Kirby. It is a direct sequel to Kirby's Dream Land.

It's up to Kirby and Prince Fluff to stop him.

The game plays alike to that of it's prequel. Kirby can jump, fly, inhale and spit- however there is a new ability called the Spinster which allows the player to turn into a tornado.

There are 10 stages with each (expect for the third one with 1 level) having 2 levels.

After the After Kirby's Dream Land series, Prince Fluff would be introduced in Kirby's Epic Yarn.

Most aspects of After Kirby's Dream Land were well received in contemporary reviews, and critics agreed that it was an improvement over Kirby's Dream Land.  It had spawned 4 sequels. Some of the most common highlights by reviewers were the game's originality with the game being populated with new enemies and improved sprites, more levels, the size of the levels, and new boss fights.

Others also criticized the game for its length and hard difficulty. 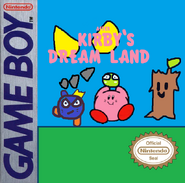 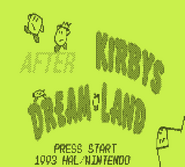 Title screen.
Add a photo to this gallery
Retrieved from "https://fantendo.fandom.com/wiki/After_Kirby%27s_Dream_Land?oldid=3176152"
Community content is available under CC-BY-SA unless otherwise noted.