Adventure Time: The Enchiridion Quest (known as アドベンチャータイム：手引書クエストAdobenchātaimu: Tebiki-sho kuesuto in Japan and Adventure Time: Quest for the Enchiridion in Europe) is an upcoming Wii U, Playstation 4 and Xbox One game developed by Amuza and slated for release in 2014.

The game follows Finn and Jake as they try to unlock the secret of The Enchiridion by collecting the 9 Crystals of Power from around the Land of Ooo, eventually being able to throw The Lich into the portal it creates and destroy him forever.

Off to the Enchiridion

Suddenly, Mannish Man the Minotaur's eyes turn black and he fights Finn and Jake, eventually losing and laying on the ground passed out. Key-per is shocked and tells Finn and Jake about an evil force that has terrorized the land of Ooo since it's creation. Key-per turns the sword which reveals nine different slots that hold the nine different Crystals of Power.

Finn flips The Enchiridion to chapter one, titled "The Nine Crystals of Power", which has a map of Ooo and will reveal where the Crystals of Power are. Unfortunately, the book can only show one stone at a time, and it currently displays the Small Crystal of Power in the Hot Dog Kingdom.

A Crystal for a Hot Dog

At the Hot Dog Kingdom, the newly formed trio confront Hot Dog Princess to retrieve her Crystal of Power but soon learn that the princess doesn't have her crystal. She reveals she gave the Crystal of Power to her Hot Dog Knights as they were going to offer it to Aquandrius in the Labyrinth so they could get more wishes.

Finn places the Small Crystal of Power into one of the slots in The Enchiridion and it lights up as it's put in. On Chapter 1 of the book, the Crown Crystal of Power reveals itself in the Wildberry Kingdom.

The group arrive at the Wildberry Kingdom and immediately decide to head to find Wildberry Princess. When they find her, the learn that she has been poisoned by Me-Mow, the miniature second-class cat assasin from the Guild of Assassins. Due to her poisoning, the Crystal of Power she holds is currently powerless. 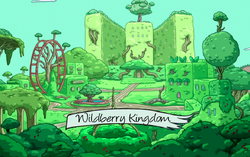 The Wildberry Princess asks Finn to meet the Berry Wizard who should know how to make an antidote to the poison. The Berry Wizard tells Finn and co to collect four different objects from around the Wildberry Kingdom and bring it back to him to create the antidote.

As they're collecting the four ingredients, Finn runs into Neptr who announces that he is the best hide and seek player after Finn forgot about their game. Neptr then decides to join Finn on his quest. After the party collect the four different ingredients, they return to the Berry Wizard and hurry back to Wildberry Princess.

Finn places the Crown Crystal of Power into one of the slots in The Enchiridion and it lights up as it's put in. On Chapter 1 of the book, the Square Crystal of Power reveals itself in the Fire Kingdom.

Finn and friends make their way to the Fire Kingdom and eventually reach the Fire Palace where Flame King is waiting. Unfortunately for Finn, the Fire Kingdom is holding their annual Bonfire of the Humanities festival where anyone who isn't a flame person is thrown into the lava.

Finn consoles the princess who doesn't want the Bonfire of the Humanities to continue, and the two show affection for each other. Flame Princess joins Finn's party and he takes her back to the Fire Palace, but once they get there, Flame Princess's love for Finn burns to bright and she endangers the entire world from overheating, fortunately Finn manages to cool her down, and the Flame King awards Finn with the Square Crystal of Power.

Finn places the Square Crystal of Power into one of the slots in The Enchiridion and it lights up as it's put in. On Chapter 1 of the book, the Spherical Crystal of Power reveals itself in the Slime Kingdom.

The Long Way Around

Entering through an underground hatch in the Grass Lands, Finn soon encounters Susan Strong who offers to help Finn get to the Slime Kingdom. Susan joins Finn's party and they get on her raft and make their way through the underground channels and eventually end up at Beautopia.

After a short break, they continue on and find themselves at the Slime Kingdom. Finn and his party find Slime Princess and ask for the Crystal of Power but are interrupted by the princess who asks for their help to get rid of her sister and husband, Blargetha and Guillermo who want to overrun the Land of Ooo. Finn and co defeat the slimes and the princess hands over the Crystal of Power.

Finn places the Spherical Crystal of Power into one of the slots in The Enchiridion and it lights up as it's put in. On Chapter 1 of the book, the Triangular Crystal of Power reveals itself in the Nightosphere.

The first problem for Finn is to find an entrance into the Nightosphere. Deciding to met Marceline, Finn and friends make their way through Grass Lands into the cave where Marceline's house resides.

Finally inside the Nightosphere, Finn and co step into the world but are immediately knocked out. Upon waking up they find out they are locked away in a mysterious room.

Marceline helps Finn escape the cell and they navigate their way through the prison-like area avoiding being found or risk being taken back into the cell. Eventually the group find Hunson Abadeer and Marceline asks if they can have his Crystal of Power, which he only hands over once he has been defeated.

Finn places the Triangular Crystal of Power into one of the slots in The Enchiridion and it lights up as it's put in. On Chapter 1 of the book, the Hollow Crystal of Power reveals itself in the Dead World.

Death and All His Friends 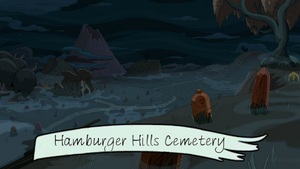 The two start by investigating at the Hamburger Hills Cemetery.

After an investigation into Ghost Princesses memories, Finn and the princess learn her true past about her love for a man named Clarence and that he killed her on the battlefield. The two ghosts finally reunite and descend to the 50th Dead World.

Finn places the Hollow Crystal of Power into one of the slots in The Enchiridion and it lights up as it's put in. On Chapter 1 of the book, the Star Crystal of Power reveals itself in Lumpy Space.

A Lump to the Past

Unfortunately for Finn, the crystal is stuck within Lumpy Space Princess' head and to get it out Finn will have to travel back in time to when she was a kid and super glued the crystal into her head.

Finn places the Star Crystal of Power into one of the slots in The Enchiridion and it lights up as it's put in. On Chapter 1 of the book, the Diamond Crystal of Power reveals itself in the Ice Kingdom.

All Aboard The Mystery Train

Adventure Time: The Enchiridion Quest plays much similar to RPG games such asPaper Mario. In the game, Finn and another character in the party make their way around the world and collect Crystals of Power that are located in different places around the world.

One of the main mechanics of the battle system is space. Certain attacks will move certain space around the battle field. If an enemy is out of range of the attack, they won't get hurt. The player and enemies can also move backwards or forwards during a turn to get closer or further away from an enemy.

In battle, their are three main stats; Health, when this runs out the character dies, Magic, allows the character to perform more special and damaging tricks and Space, which determines whether an enemy can be hit or not.

Retrieved from "https://fantendo.fandom.com/wiki/Adventure_Time:_The_Enchiridion_Quest?oldid=3209465"
Community content is available under CC-BY-SA unless otherwise noted.