Abyss is a recurring character in the Macaroni Quest series. It is typically seen possessing someone else in order to cause chaos, but it still often causes mischief on its own.

Abyss is first seen controlling Beth in an abandoned village. After Chuck defeats Beth, Abyss comes out of her body and acts as the 2nd phase of the boss fight. He leaves defeated, claiming that he will one day have a legendary battle between "morality and me." 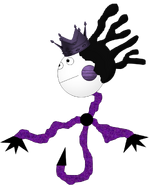 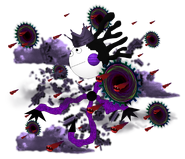 Evolved Snaketh in his storm
Add a photo to this gallery
Retrieved from "https://fantendo.fandom.com/wiki/Abyss?oldid=3143716"
Community content is available under CC-BY-SA unless otherwise noted.