Absol, known in Japan as アブソル (Absol), is a Dark-type Pokémon. It isn't known to evolve, but it can Mega Evolve into Mega Absol with an Absolite.

Absol is able to sense natural disasters with its scythe-like horn on its head. However, due to the disaster happening before it appears before people, Absol is often the blame for the disasters.

Absol's name may be derived from 物騒 bussō (dangerous), but it is also likely to be a combination of ab- (prefix meaning "away from") and sol (latin for sun), referring to the Dark-type, and the solar eclipse, the latter being considered a sign of apocalypses and other disasters in many cultures. It may also refer to absolute. 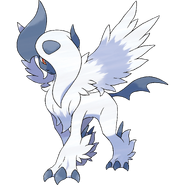