Abomasnow, known in Japan as ユキノオー (Yukinooh), is a Grass/Ice-type Pokémon, inhabitant to snowy areas. It has evolved from Snover once it reached Level 40. It is also known to Mega Evolve into Mega Abomasnow. The required Mega Stone is called Abomasite.

Abomasnow is a large, bipedal creature with white, shaggy, snow-like fur. It has purple eyes, large tufts of fur resembling eyebrows, and long, mustache-like fur covering its mouth, as well as long tufts of fur growing on the chest and back. The female chest hair is longer than the male's. It has dark, evergreen-colored hands and feet, as well as a long, spiky tail of the same color, resembling an evertree. It also has four evergreen-colored buds on its back, said buds resembling pine cones.

Dubbed "The Ice Monster", it lives on snowy mountains and is able to create blizzards so it can hide itself in the snow. They seem to come out their hiding place only when snow flowers start to bloom. When the snow flowers lose their last petal, the Abomasnow retreat back to unknown places.

When it Mega Evolves, it becomes even shaggier and hairier than ever, growing long tufts of fur everywhere. The buds on its back grow into large chunks of ice, roughly shaped like pine trees and covered in white and green fur. Its tail also turns into ice and gets covered in fur. Abomasnow's back became so heavy that it now stands on all its four limbs and slightly leaning. Abomasnow's green hands become more spherical and the fur around its wrists have become more shaggy.

Abomasnow is a mixture between a snow-covered evergreen tree and the yeti, a monster thought to live in the Himalayas.

Abomasnow's name is a shortened version for Abominable Snowman, a nickname for the yeti 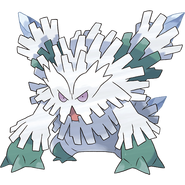