“Mario, It's a trap! He has the power of the shards.”
— Abigail, Super Mario Bros: The Sacred Shards

Abigail is the princess of a Kingdom. She is first seen in Super Mario Bros: The Sacred Shards. She basically takes Peach's place in getting kidnapped by Kamek. When the game is beaten, she is playable and has an ability of, when she has no power-up, hitting with her umbrella, which also changes color with the power-ups.

Abigail takes Peach's place and is kidnapped, but by Kamek rather than Bowser. It is most likely though, that Bowser sent Kamek. She is kidnapped during a ceremony of burying the sacred shards. Like Princess Peach, she uses her umbrella to float (Pressing up in mid-air) and to hit enemies with. In story mode when she is not being played as, she has her hair down. When the character is playing as her after unlocking her when finishing the game, she has a ponytail.

In SSB Battle! Abigail appears as a little girly-girl with her plink blanky only seen once in SMB Sacred Shards. She also has a more realistic dress. Two of the few things that are a major part of SMB Sacred Shards is her gloom attack (Cry) and her final smash (Union of the Sacred Shards). The rest of the attacks, like her forward A that she kisses and a heart (Wich blows up upon contact like the peach bomber) shoots from her mouth seem to be made up completely. Her blanky attacks at least have some reference to SMBSS.

Union of the Sacred Shards - Abigail lifts up the shard capsule and opens it. The 7 shards unite and blast rays of rainbow light that cause severe damage. One of the best Final Smashes in the game, next to Landmaster and Giga Bowser.

Taunt 1: Abigail does a ballerina twirl. Taunt 2: She throws the shard container in the air and catches it. If it hits someone, they get 2 damage but fly upward like with Luigi's kick taunt. It is hard to hit with it because she tosses it up slowly. Taunt 3: She falls, gets up, then giggles to herself.

Abigail as she first appears in Super Mario Bros: The Sacred Shards

A Sprite of Abigail in her Super Smash Bros.: Battle! dress and style made by Spike1234 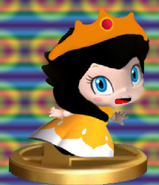 Abigail's as she appears in Super Smash Bros.: Battle!