"Abaddon" was thought to be a mysterious and weary traveler in search of a power source to restore him back to human form. It is revealed this was all a lie in Requiem of Darkness. It is revealed he is actually the manifestation of Order in the Universe, and the rival of The Mysterious Mr. ?, the manifestation of Chaos. He is, in actuality, the being that makes sure Chaos does not overwhelm the balance in the universe. He cloaks himself in darkness to hide his true identity. He is killed by ? at the beginning of Requiem, plunging not just the Fantendoverse, but all universes into Chaos.

Later, he invaded Percivus and killed everyone on it, the gods then descended and trapped him within the cave, along with all the machinery. He escaped during the events of Fantendo Visual Novel: Fracture with the help of the Catalyst named Reese, which he created with the DNA of The Fan and a woman named Abba.

During the events of Fantendo Smash Bros. Shattered, he has captured his nemesis The Mysterious Mr. ? and has sent him in for execution. He also created another Catalyst, which he creatively named Reese II to assist him.

Abaddon appears to Reese if they decides to travel alone, uttering his words that he spoke before being trapped on Percivus. It is unknown how he returned since he's either dead or trapped in a cave.

There are actually two Abbadons. The first you see is actually named Abba, a woman that Abbadon has managed to brainwash to get her to carry out deeds in his name. Using Abba, he devised a plan to get the Fan's and Abba's DNA to create Reese. Using Reese as a catalyst, he could free himself from the cave by finding a timeline that had him not trapped in the cave.

However, he needed Reese to create those timelines, so he sent Reese out to branch out those timelines. Around the same time, the Enemy used the remains of Percivus to create Enemy Earth believing it was empty.

After getting free, Abbadon headed to find his rival Mr. ?, but was stopped by Palutena who decided to try and trap him in the cave again but she was wounded and was unable to stop him, leaving Reese and his "mother" to attempt to stop him. Although Abbadon escapes, he is too weak to carry out further plans for the time being and is unable to brainwash people.

Abaddon later appears in Fantendo Smash Bros. Shattered. The manifestation of Order in the Universe, and the rival of The Mysterious Mr. ?, the manifestation of Chaos. He recently escaped from his cave prison using a Catalyst named Reese. He attacks with diamonds made out of pure energy that swing from his sleeves; a pendulum effect. He can also use dark magic.

He appears in the story of the game during the second act.

Being a fixed point in time and space, Abaddon has lived many different lives, his last spoken words before he was trapped in the cave on Percivus were as follows-

I exist in the minds of the corrupt,

And cease in the minds of the holy. 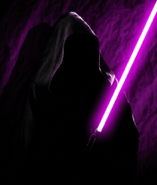 3D image with a lightsaber
Add a photo to this gallery
Retrieved from "https://fantendo.fandom.com/wiki/Abaddon?oldid=2522629"
Community content is available under CC-BY-SA unless otherwise noted.