ARMS 2 is a fighting game for the Nintendo Switch, and is a direct sequel to ARMS. The game contains a mostly new character roster, along with new stages, gamemodes, and features. It was released on February 18, 2020.

The game was first revealed at the How the Grinch Stole the Holiday Showcase, showcasing two new fighters, as well as new attributes and gamemodes.

The gameplay has been slightly changed from the first one.

Most gamemodes from ARMS 1 have been replaced by new ones in ARMS 2. Some old gamemodes return, however.

This gamemode is exactly the same as ARMS 1. The goal is to knock out your opponent(s). Punch, grab, or rush your way to victory! Items will randomly appear during the match, such as bombs or juice, which can create both advantages or disadvantages. 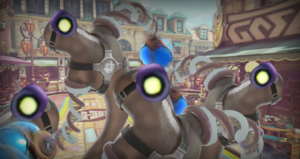 This gamemode is very similar to 1 vs. 100 from ARMS 1, but now you have the option of working together with a team. The goal isn't to defeat 100 Cells this time; it's to survive for as many waves as possible. Each wave can bring on cells using random ARMS (which they can charge too). The more waves you survive, the harder the game gets. Soon enough, Cells will take multiple hits to defeat, and you'll have to stand your ground against tough bosses.

However, after each wave you'll be rewarded different items to help you out, such as HP Juice. When you finally lose, you'll earn points based on how many waves you survived and how much enemies you took out.

Fight against different varieties of bosses in this gamemode! You can try to take on the boss by yourself or with a team! The goal is to defeat the boss in a certain amount of time. Bosses such as Hedlok and Grime have special traits and abilities they can use to take you out!

In Control Clash, there is a control point in the middle of the map. Stay in it for as long as possible, and don't let the enemy control it! The control point has lots of space, so you can still dodge and move around. Health is infinite in this gamemode.

This gamemode is quite similar to Battle, but now you fight over an orb containing Hedlok's mask! Obtaining Hedlok's mask allows your character to become Hedlok, giving you an advantage. After a while, the Hedlok mask disappears and you'll need to grab it again. The mask can also be knocked off if you're hit hard enough.

Beat your opponent(s) to win!

ARMS 2 features a Story Mode where the fighter the player plays as discovers that ARMS Labs has retreated into the shadows, planning to come back and eventually take over the world. TBA

Party Matches are almost exactly the same as in ARMS 1. 1-2 players can enter a Party Match together. You are put into matches with a random map and gamemode, earning points in the process (unless you disconnect during the match). All gamemodes are playable in Party Matches, but you cannot play by yourself.

You won't be put in a match if you're selecting a fighter or changing your ARMS. The ARMS Shop can also be opened up in a Party Match.

Players can now level up individual fighters. XP can be earned by participating in different gamemodes. At certain levels, you can receive rewards or unlock ARMS in the ARMS Shop. Your fighter's level will be displayed during multiplayer. XP can also be earned from singleplayer battles.

Leveling up can award you badges, special costumes, or unlocks in the ARMS Shop.

The ARMS Getter has been replaced by the ARMS Shop, a much more simple system where you can buy ARMS for certain characters, as well as special costumes and badges.

You can buy ARMS for any character, but some ARMS are not available for purchase until you hit a certain level with that character.

There are currently ten attributes in ARMS 2. The attribute of an ARM will kick in after it is charged. When a fighter is hit by an ARM with an attribute, they will undergo a specific status effect, and in all cases except Blind, they will be surrounded by an effect of a color corresponding to that attribute.