8 Grand Ma is an bootleg game for the Mega Drive.  It was released in 1993. It is an pirate hack of Bart's Nightmare. It is actually named Sonic 8 (by means of the cart and its name in the bootleg 8-in-1 Sonic multicart in Awedosauce stream), but people more commonly refer to it by it's title screen name.

Since 8 Grand Ma's a pirate/ROM hack, there has to be differences.

Like Grand Dad's, Grand Ma's sprite is Bart with the head of Sonic.

Gladly, this gives artists time to choose an look they like, like recolored Shouoia from the title screen or Bart Simpson with Sonic's head. 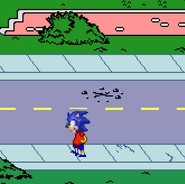 Shadow 2 Gameplay.
Add a photo to this gallery
Retrieved from "https://fantendo.fandom.com/wiki/8_Grand_Ma?oldid=2931548"
Community content is available under CC-BY-SA unless otherwise noted.